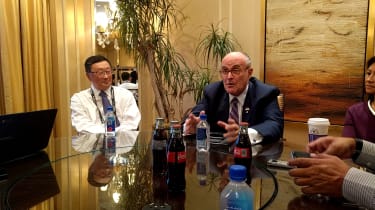 When BlackBerry announced that it was stopping production of phones, many people took that to mean one thing - the end of the iconic BlackBerry devices so many people have come to love. But that's certainly not how John Chen, the company's quiet-spoken yet determined CEO, sees it.

"What you're going to see over time is more phones, more BlackBerry phones out there, because I [will] have multiple parties creating and distributing phones," he told IT Pro, in a roundtable interview at CES 2017. "I also have local parties in the local spaces where I normally can't compete."

Chen pointed to Indonesia, claiming that BlackBerry currently has "about 50 million users" there, giving the company a 20% market share. That's why a local carrier - the number two in the market - was keen to license the BlackBerry name and sell its own phones.

And, as has been well documented, TCL - the company behind Alcatel - will be building the final BlackBerry-designed phone, with the "Mercury" welcoming back the front-mounted keyboard that's so strongly associated with the BlackBerry name.

The final piece of the jigsaw before BlackBerry phones (as Chen hopes) become a worldwide force once more is the trio of Bangladesh, India and Sri Lanka, with Chen claiming a deal for a local builder is on its way.

So why not build the phones itself? According to Chen, it comes down to profit margins. "We put so much money into IP creation and innovation that I'm not set up to take 1% or 2% [profit] on the hardware side."

"I don't want to make [phones] anymore," he added. "Making phones is highly intensive capital, lots of heavy lifting, a lot of hard work and very little margin. This is like us starting a PC company today."

"Instead I want to take advantage of local distribution," Chen said, explaining that his Indonesian partner "has more stores than Apple could ever build in Indonesia".

With this model, BlackBerry keeps producing phones without the risk or financial burden of making the phones itself, but pockets the licensing fee for its software and renting out its brand name.

"I still manage the experience and the security because I still have the software," Chen added.

Chen shared the roundtable with Rudy Guiliani, the outspoken former Mayor of New York City. Earlier, the two had announced a new partnership where BlackBerry would supply the mobile security intelligence to Giuliani Partners, the politician's cybersecurity consultancy firm targeting government and enterprises. Chen said the deal ties into his argument that the BlackBerry business can start moving beyond hardware devices and into broader areas of security.

"We also have [a] security brand, Secure by BlackBerry, which could go beyond phones - into things like Internet of Things," said Chen.

By moving out of phone production, "I can get out of the process and the capital and the cash required to keep the handset going, only on the software, and move more of that investment into the cybersecurity side or the automotive side."