The re-released classic is already selling out 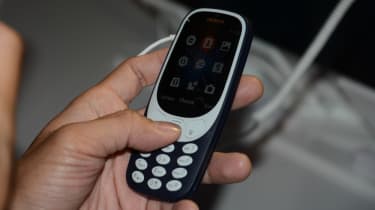 Seventeen years after the launch of its namesake, the revamped Nokia 3310 goes on sale today for 50 in the UK - though it's already sold out in some places at the time of writing.

The mobile phone boasts many of the features that made the old 3310 such a success, like Snake, a long battery and the signature design Nokia excelled at.

This time around it's HMD Global that is responsible for the phone's look and feel, making the 3310 available in blue, grey, yellow and red for 49.99.

However, due to pre-orders and demand for today's launch, Carphone Warehouse said the phone was already out of stock at the retailer at the time of writing (midday, 24 May) - people can pre-register their interest for when new stock arrives. Vodafone also stocks the device in the UK, though its levels of stock are not known. 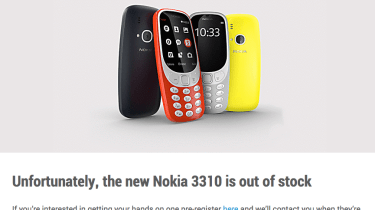 While the Nokia 3310 (2017) shares plenty of similarities with its predecessor, it's done well to upgrade on the old model's signature features too. For a start it's less blocky, and its famous Snake game plays out on a colourful screen with different game modes, too.

This time it also features a rear camera and a screen you can see in sunlight too - a great plus for those who remember squinting at the original every time a text came through.

In our sister site Expert Reviews' early hands-on review, they said of the phone: "Nokia's 3310 isn't a smartphone; it's more a 2017 re-do if anything. It's an interesting idea - pull at the heartstrings of nostalgia-ridden fans for the firm's big comeback and for the most part, I think it's worked. Nokia's 3310 resurgence has raised a lot of eyebrows, even if it is the strangest product to launch at this year's MWC."

15/02/2017: Nokia could relaunch one of its most popular phones ever at Mobile World Congress (MWC), according to notorious leakster Evan Blass.

Finnish firm HMD Global is licensed to sell the Nokia 3310 device, and will market it at MWC at the end of the month, Blass wrote in VentureBeat.

Known for its rugged chassis and outstanding battery life, the revamped 3310 won't wander too far from its original design, Blass said, referring to a source briefed on HMD's plans. 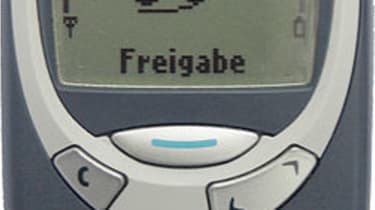 The budget device will be sold for just 59 as a second phone with very few frills, according to the publication, though fans of the classic Snake II will hope it appears.

The original Nokia 3310 is available to buy still from Amazon. If you want to buy it new, it's more expensive than the rumoured revamp will be, at 66.99, or you can buy it refurbished from 23.99.

Blass said the Nokia 3310 has been specifically designed for the European market, which suggests it'll be coming to the UK, although we may not be the first country to see it launched.

HMD will also supposedly also reveal the Nokia 3, Nokia 5 and Nokia 6 at MWC. The Nokia 3 is an entry-level Android device retailing for 149, while the Nokia 5 is said to feature a 5.2-inch screen, 2GB RAM and a 12-megapixel camera. The Nokia 6 is the flagship of the three, with a full HD 5.5-inch screen.

The latter device has already been on sale in China, running Android 7.0 Nougat with a Snapdragon 430 SoC, 4GB of RAM and 16-megapixel camera.