Up close and personal with Samsung’s iPad Pro 9.7in rival 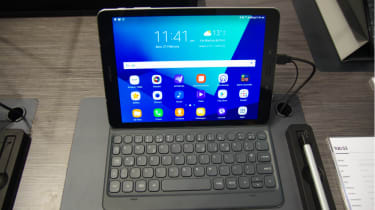 It's been a while since we've been excited by a tablet launch, but the new Samsung Galaxy Tab S3 looks to be the most significant development in the category since the iPad Pro 9.7in.

Just like Samsung's last premium tablet, the Tab S2, the Tab S3 has a gloriously colourful 9.7in AMOLED display, and is incredibly thin and light. The difference this time around, though, is that the tablet comes equipped with an enhanced S-Pen stylus for making notes, annotating documents and sketching and painting onscreen, and an optional iPad Pro-style "Pogo" keyboard.

So what makes the Galaxy Tab S3 tick? Inside, it's powered by a quad-core Qualcomm Snapdragon 820 processor - that's a little behind the times in smartphone terms, but should be plenty quick enough to power this little beauty. There's 4GB of RAM, 32Gb of built-in storage and a microSD card slot for expansion that'll take cards up to 256GB in size.

There's also optional 4G/LTE with download speeds of up to 300Mbits/sec on the cards, plus stylus support and a 6,000mAh battery that promises to deliver up to 12 hours of video playback per charge.

As for the camera, that looks promising, too, with a 13-megapixel autofocus snapper on the rear capable of shooting 4K video and a 5-megapixel shooter on the front. There's also a front-mounted fingerprint reader, and you'll almost certainly be pleased to discover that Samsung isn't dropping the 3.5mm headphone jack. There's one on the bottom edge right next to the USB Type-C connector.

Pick it up, however, and the first two things that strike you are the vibrant AMOLED screen and the Galaxy Tab S3's incredible slimness and light weight. This tablet measures a mere 6mm from the glass at the front to its metal rear backplate, and it weighs a ludicrously light 429g. Those are iPad Pro 9.7 rivalling stats right there; no word of a lie, this an absolutely gorgeous tablet.

With the iPad Pro 9.7, however, you have to pay for the Apple Pencil stylus. Here, it's thrown in and it's Samsung's most advanced S-Pen yet, with a smaller tip than ever, measuring 0.7mm across. It felt pretty nice to write with on the screen in the short time we had with it at the launch event, but our favourite thing about it is the Screen Off Memo feature carried over from the Note 7, which allows you to jot quick notes on the screen without having to unlock it or even turn it on.

There's also a physical pogo-pin connection on one of the long edges of the tablet so you can go the whole iPad Pro-alternative route if you want. Unfortunately we weren't able to try out the keyboard at the launch event, since Samsung had it locked in a glass case.

It's impossible to tell quite how good tablet speakers are in the hubbub of a big technology launch, so we'll have to hold fire on passing any kind of judgement just yet. However, the quad-speaker tablets we've seen so far the iPad Pro 12.9, the iPad Pro 9.7 and the Huawei M2 10 have sounded great, so we have high hopes of these.

The Samsung Galaxy Tab S3 looks to be a very nice tablet indeed, but then the Tab S2 was great as well. The key factor will be the price, and we don't know what that is just yet.

We'd imagine that, given its past record, Samsung will probably set the price at a similar level to the iPad Pro 9.7, which would make it 549, but with the S-Pen thrown in. We'd love it to be cheaper, but we can't see it happening.

The big problem Samsung faces with the Tab S3, though, is that no matter how good the hardware, Android still doesn't make a very good tablet operating system. Aside from that, the Samsung Galaxy Tab 3 looks very nice indeed.