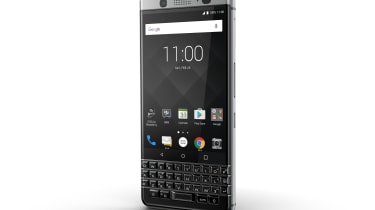 TCL has launched the BlackBerry KEYone, the first device announced under the branding agreement between BlackBerry and TCL.

The striking thing about the KEYone is it reverts to the same design BlackBerrys have become known for, with a full QWERTY keyboard on the front, taking aim at the business market.

This business-centric focus continues into the software of the KEYone, with BlackBerry's software and security taking centre stage, helping business users protect their device.

BlackBerry Hub brings all messages to one place, including emails, texts and messages from any social media account. You can also use the feature to manage multiple email accounts including Gmail, Yahoo Mail, Outlook, Microsoft Exchange accounts and IMAP/POP accounts without switching between apps.

DTEK by BlackBerry also comes preinstalled, offering up to date information on the security status of the device. It'll offer up hints and tips of how the user can enhance their security if their device is at risk. The app will also monitor BlackBerry's integrated apps, such as contacts, location or text messages.

"We have worked closely with TCL to build security and the BlackBerry experience into every layer of KEYone, so the BlackBerry DNA remains very much in place," said Alex Thurber, Senior Vice President and General Manager of Mobility Solutions for BlackBerry. "We couldn't be more excited to help bring it to market and introduce it to BlackBerry fans."

The BlackBerry KEYone runs on Android 7.1 and is powered by Qualcomm's Snapdragon 625 mobile platform with the the company's Adreno 506 GPU. BlackBerry says this offers enhanced battery life and coupled with Qualcomm Quick Charge 3.0, it'll be charged up to 50% in 36 minutes.

"Impressively designed to be distinctly different, the BlackBerry KEYone reimagines how we communicate by offering unmatched productivity and the world's most secure Android smartphone experience," said Nicolas Zibell, CEO for TCL Communication.

The BlackBerry KEYone will be available for 499 SIM free from April.