Despite being discontinued, the OnePlus 3T is one of the best phones around 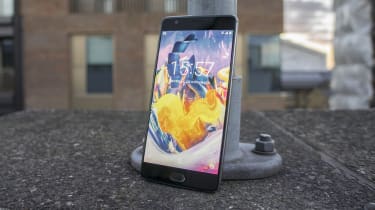 The OnePlus 3T has a larger battery than its predecessor, with an extra 400mAh of capacity. Oddly enough, though, it actually racked up a less impressive score than the original OnePlus 3 in our battery tests, falling short by more than three-and-a-half hours. However, its score of 13hrs 22mins, while not chart-topping, is definitely respectable, and we found that it easily lasted through a full working day even with heavy use.

If you do end up draining the battery halfway through the day, though, there's no need to worry - the OnePlus 3T's 'Dash Charge' function will ensure you're back up to speed in a flash. It's similar to other forms of fast-charging tech, but it's much more effective than any other examples we've seen.

OnePlus promises "a day's power in half an hour" with Dash Charge and, while that may be stretching it slightly, it's not far off. After being plugged in for 30 minutes, our OnePlus 3T's battery went up by a fairly astonishing 43%.

It's worth remembering that Dash Charge is a proprietary technology, however, so don't go thinking you'll be able to pick up a couple of cheap Qualcomm QuickCharge adapters - it'll only work with the official OnePlus chargers.

The OnePlus 3's rear camera is rather good and nothing's changed here - it's essentially the same, and it's just as impressive as before. The main change with the 3T is that the front-facing camera has been bumped up to a 16MP sensor.

Sadly, we were reminded that more pixels does not necessarily mean better quality, and the OnePlus 3T's front camera still can't measure up to the likes of the Pixel XL or the iPhone 7 for clarity, exposure and colour balancing. It's not a bad camera, but we feel like OnePlus is chasing impressive numbers, rather than investing in genuine improvement here.

Independent of price, the OnePlus 3T would still be an excellent phone on its own merits. It can capably go toe-to-toe with flagships like the Galaxy S7 and the Pixel XL, with impressive specs and performance and a pleasing catalogue of features.

Once you take into account the ridiculously low price, however, the OnePlus 3T starts to look like a no-brainer. Admittedly, there's not a huge amount to justify the 70 difference between the OnePlus 3T and its predecessor - but it's still amazing value compared to its competition.

Its performance is all but best-in-class, the Dash Charge is superb and the display and design quality are both top notch. With such an impressive list of selling points for just 400, we've got to ask - why pay more?

When flagship-quality specs are this cheap, why would you bother buying anything else?