BlackBerry and the decline of the QWERTY smartphone

Since the launch of the iPhone, the physical keyboard has all but disappeared. But what about those who want some QWERTY time? 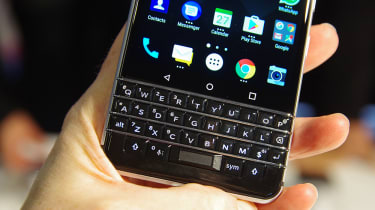 Before Nick Clegg took office as deputy prime minister back in 2010, he was a self-confessed heavy laptop user. But one of the shackles that comes with high office is a need for added security. As with all new government ministers back in 2010, Clegg had to trade off as he revealed in his memoir his laptop for a desktop computer and a secure BlackBerry. The desktop computer would barely get touched. He and his colleagues soon became BlackBerry addicts.

The plight of the BlackBerry, though, has eerily mirrored that of Clegg. In the five years he served in government, RIM the firm behind the BlackBerry line found itself outthought and outpaced by more flexible Android and iOS devices that were proving nimbler, more reactive and - ultimately - more interesting to the world around them. According to figures from Statista, the BlackBerry OS has gone from peak market share of 20.1% in 2009, to the 0.1% it suffered as 2016 drew to a close. You'd need a top class spin doctor to find the light in those numbers.

It was a surprise to few then when RIM announced the cessation of production of BlackBerry smartphones in September of 2016. Instead, the brand name is being outsourced to other hardware manufacturers and RIM will instead focus on designing software. Not quite the end of an era, but certainly a particularly brutal fall from grace. At least in the short term.

Yet the BlackBerry still known in some quarters as the Crackberry, amongst those who refuse to give them up always had an advantage that rival smartphone manufacturers have never really matched: a physical keyboard.

It's a feature that surprisingly few smartphone manufacturers seem willing to offer and, given the expense of making such devices, smaller rivals are understandably wary to step in.

Yet coupled with the aforementioned security features, there were and still are compelling selling points to some business customers. Primarily, many find it far easier to accurately type on a physical keyboard. There's an additional consideration, too, for a subset of the userbase whose physical needs made it difficult to adopt touchscreen technology.

The decline in the physical keyboard isn't a new story, though.

It was Steve Jobs, with the design of the original iPhone and subsequently the iPad who opted for a keyboard driven by software, rather than physical keys. There's logic, clearly. A physical keyboard impacts on the available space for a screen itself, and Jobs rightly figured that people would rather have a bigger display to work with. Yet when shrunk to smartphone size, the on-screen keyboard is a feature that suits those with diligent digits, but not necessarily those with more sizeable ones (this writer included). Furthermore, there's a contingent that actually prefers to touch a key than prod a screen.

That contingent, though, has not been well supported of late. Apple, as you might expect, has no plans at all to offer a QWERTY keyboard on its devices. Samsung, meanwhile, offered the Stratosphere once upon a time, but it's a device long since discontinued. Motorola too has backed away from this segment of the market. In short, if you're after a device with a keyboard on it, your choices have rarely been as limited, with no sign of any manufacturer willing to fight against this particular trend.

As a consequence, it's been an oddly homogenous smartphone market we've been left with. An arena that once rippled with true innovation now battles over multiple cameras instead. Salvation for the physical keyboard, though, may be coming with a trip into the past. Nokia is first up, with its headline-grabbing release of an updated 3310 phone. That's positioned as more a novelty, though, at least for now. More promising is the first collection of BlackBerry phones under its new arrangement.

Certainly for business use, there's a compelling case for the BlackBerry approach, and it's perhaps no coincidence that the Android-based BlackBerry Priv, released to some acclaim in 2015, is regarded by many as the best QWERTY device of its type on the market. The upcoming KeyOne, however, loaded with full Android compatibility, is a promising advance. Early word has been mixed, and pricing needs to be looked at (it's been positioned as a premium phone, and that may be a problem), but there's still a sense it's a step forward.

What'll be interesting to see is how damaged the BlackBerry name is, though. There's little point sugar-coating it. Reviews for the Priv were strong, but the BlackBerry brand name on the side did it no service. It's worth considering if the device would have enjoyed more success with an Apple or Samsung logo on it. The KeyOne may face a similar battle.

For the first time in a while, there's a touch of hope for physical keyboard users, though. BlackBerry's willingness to licence its technology to third parties and the move away from its own proprietary operating system exclusively (although inevitably, a switch to Android brings with it security flags), is a help. And if Nokia's experiment works, then that too could open a path up.

However, whilst Nick Clegg, off the back of his aforementioned memoir, has enjoyed something of a rehabilitation in the last year or so, the QWERTY keyboard has not yet enjoyed a similar turnaround. The whims of the consumer market, it seems, are taking heavy precedent over what have become niche demands of some in the business sector. The keyboard has become collateral damage.