Google’s streaming stick is a great travelling companion, but how can you use Chromecast without Wi-Fi? 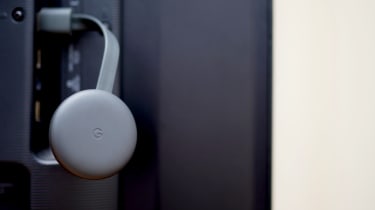 When the Google Chromecast was first unveiled more than six years ago, it offered an alternative way to access online content on televisions.

It provided a way of beaming a raft of content, including subscription video services, films, games, photo galleries or presentations to your TV, at a time when smart TVs were only just demonstrating their power. The idea of using a small USB peripheral to transform your regular TV into such a smart device was worthy of attention.

More than half a decade after its release, we now have the third generation of Chromecast, bringing faster and higher-quality streaming with support for 4K resolutions. The device is now capable of streaming content from almost any device, whether that's PC or Mac, Android or iPhone, all across the highly accessible network technology that is Wi-Fi.

But what happens if your Wi-Fi is down, or if you're simply unable to gain access to a Wi-Fi network from where you are? Perhaps you want to share your content to a TV in a public place, or somewhere that doesn't have a public Internet connection, such as a hotel or in a remote location.

What you may not know is that unlike the Amazon Fire Stick, perhaps Chromecast's biggest competitor on the market, Google's device can beam content to a TV without ever having to connect to an internet connection.

Before you start using the device, it’s important that you do some prep work first. You need to ensure that your Chromecast is running the latest version of its firmware, as this trick won’t work otherwise.

A quick way of checking this is to see if you’re able to make use of a function called ‘Guest Mode, which was added much later in the device’s product cycle. This functionality allows Chromecast users to open up their devices to guest access without the need for that guest to be connected to the internet.

This works by utilising a WiFi beacon built into the Chromecast. Once an app that’s capable of streaming is opened on the guest’s device, it will search for the beacon in order to create a bridge. Once connected, they should be able to ‘Cast to Chromecast’ just as you would normally do across a network.

For this pairing to work, the Chromecast device will generate a random four-digit code that’s then emitted as an audio signal to nearby devices, although human ears won’t be able to pick this up. While quite nifty, this type of pairing is notoriously temperamental and won’t always work, so you might find you will need to pair using the code displayed on the TV or monitor.

You can also mirror the display of an Android device to a Chromecast streaming stick without using Wi-Fi.

To mirror an Android device, open the Chromecast app on it (the Chromecast app is now known as Google Home), tap on the burger menu in the top left corner (this looks like three lines together), tap on Cast Screen/Audio, and then choose your Chromecast device.

If your Chromecast is connected to a TV that is for whatever reason sat in a Wi-Fi blackspot, then you can (if you have a long enough Ethernet cable or powerline) connect the Chromecast directly to an Ethernet port of your router via an Ethernet adaptor for Chromecast.