What is Google Daydream?

We explain everything you need to know about Google Daydream, Google’s virtual reality platform 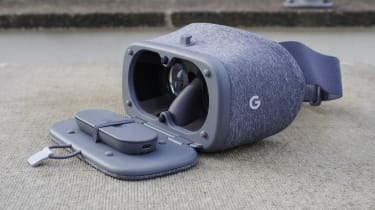 It would seem almost every tech company has seen the opportunity offered by virtual reality, with many of the big names acquiring smaller companies with VR focus and making it one of their priorities for the future.

Google is no different, launching Google Daydream, its virtual reality platform and Daydream View, its very own virtual reality headset for taking a peep at the virtual worlds. Although Google hasn't positioned its VR offering at any particular market (HTC Vive, for example takes aim at the gaming market with its tie up with Steam), that could be a good thing, keeping the platform just as open as its Android operating system.

We explain everything you need to know about the technology and why it's taking on the big players like Oculus (now owned by Facebook) .

Google Daydream was announced at the Google I/O  developer conference in May 2016, with the Daydream View launched in November.

But, like all good things, the platform took quite a while to get to the point it could launch as a

serious virtual reality platform. You may remember Google Cardboard - the company's first attempts at getting augmented reality into the mainstream. Well, Google Daydream is the follow on from that and Google has applied lots of key learnings, including the lightweight headset and the need for a good apps store to go with it.

As a result of its efforts with Google Cardboard, the company opened up its platform to third party developers to bring their apps to the platform too back in January, hoping to make it as popular as its Android App Store.

What does Google Daydream do?

Google Daydream brings together Android-powered smartphones and virtual reality, making it simple for users to access content on their device and turn it into a virtual world with a viewer.

Google Daydream also includes a store where you can download for free and buy various apps for your Daydream View and content, such as videos. Everything can be accessed while wearing a VR headset, so it's not surprising the UI is pretty impressive.

At present, the true scope of Google Daydream hasn't really been explored, with more developers saying they will be launching apps and games in the future. However, any early adopters will be able  to take advantage of some of the biggest apps around, including Google's own YouTube, Google Maps Street View, Google Play Movies & TV, and Google Photos. Netflix is also available on the platform and Ubisoft has been onboarded as a partner too, meaning we can expect some awesome gaming action too.

Google Daydream will only work with selected devices at the moment, and unsurprisingly, they're all Android-powered devices. At the time of writing (April 2017), Google Daydream is available for use with the Google Pixel and Pixel XL, Motorola Moto Z, Asus SenFone AR and ZTE Axon 7, although Asus and Motorola devices need to be upgraded to Android Nougat before they'll work.

Similarly, the only VR device that will stream content from your device to in front of your eyes is the Daydream View, although it's likely other Android device manufacturers, will launch their own in the future. Huawei is the most hotly tipped to release their version alongside a flagship smartphone in future.

The DayDream View is, at the moment, the only headset for use with Google's Daydream VR technology. Compatible devices just slip into the front compartment and then the VR content can be viewed through the goggle-like facepiece.

It's a lightweight headset in comparison to other on the market and because it's made from fabric rather than plastic or rubber, it's less likely to get you sweaty if you keep it on for a long time. To suit most tastes, it's available in a Slate grey, Crimson red or Snow White finish.

It hooks up to a smartphone using NFC and capacitive nubs to make connecting a breeze.

Alongside the headset, Google also launched the Daydream Controller, a wireless device for controlling the headset. It integrates proximity sensors to detect where the user's hands are and features a touchpad, circular buttons, volume buttons and a status light.