Despite its age, Samsung's S8 is still up there with the best of them 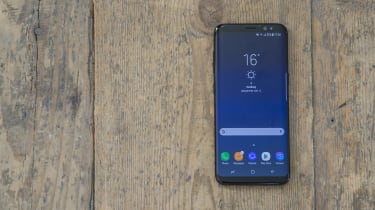 Another key differentiator for the Galaxy S8 is DeX, Samsung's desktop docking station. DeX allows users to connect their S8 to a monitor, mouse and keyboard, using it like a traditional desktop computer. Similar to Windows 10's Continuum feature, slotting the S8 into the docking station immediately launches a version of the Android OS that's been optimised for desktop use.

We've been somewhat underwhelmed by the performance of Windows 10's Continuum feature in the past, but Samsung's alternative is almost frighteningly powerful. For starters, it's literally plug-and-play; once the DeX Station is hooked up to your various peripherals, moving from a mobile to desktop experience is as simple as docking your phone. 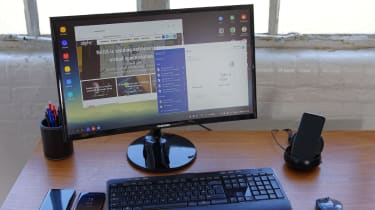 Power's in no short supply either. Not only can DeX support multiple windowed applications, it can handle huge amounts of apps running simultaneously. Even with more than ten demanding apps open at the same time, the S8 showed barely a hint of stutter or sluggishness.

App selection isn't an issue, as DeX has access to the Google Play Store. Many apps have been optimised to run natively in desktop format, but even the ones that appear in their default mobile format are still perfectly useable. The only application that we found didn't run on DeX at all was Spotify, but business apps like Slack, Buffer, Trello and more were all compatible.

Another superb feature is that Samsung has given DeX support for Windows keyboard shortcuts. This includes not only common shortcuts like copy, paste and cut, but even more obscure funtions like window snapping and screenshot capture. The ability to use common keyboard shortcuts instantly adds an extra element of efficiency for businesses, increasing the potential productivity benefits of DeX even further.

It's not going to kill the laptop altogether, but the extra layer of enhanced functionality that the DeX Station adds to the Galaxy S8 means businesses can genuinely roll it out as an all-purpose employee device. Samsung has established partnerships with Microsoft and Adobe to bring some of their business productivity software to DeX, along with supporting virtual and remote desktop services from vendors like Citrix, VMWare and more. DeX is powerful, versatile, and it could turn the S8 into the only work machine you'll ever need.

The S8 and S8+ are largely the same device in two sizes; it's only in the hardware where some minor differences come to light.

Battery life may not differ too much though, because the larger battery has to power a bigger screen. It's also worth pointing out that the S8 has a very slightly sharper display compared to the S8+, boasting 570 ppi compared to the Plus's 529 ppi, because the display resolution is identical so the pixels are spread across a larger area on the S8+.

Naturally, the S8+ is also more expensive than the smaller model, costing 779 compared to the S8's 689 price tag.

When it was launched, the Galaxy S8 was far and away the best smartphone we'd ever seen. A year on from its release, it's still one of the most impressive devices on the market, and even its successor hasn't done much to better it. While the Galaxy S9 is the more technically proficient device in some respects, it's not a great leap forward overall.

Truth be told, considering the 200 price difference between the two devices, we'd have no problem opting for the S8 over the S9. While there's much to recommend the S9, we're not sure it's that much better than the previous generation.

If you're looking for the absolute top-of-the-line device, then the S9 is still the one to beat, but if you don't mind accepting a slight compromise on performance, then the S8 offers much better value.

This review was originally published on 18 April 2017, and has been subsequently updated with new information

The Samsung Galaxy S8's appeal hasn't dimmed with age. It's still one of the most attractive and powerful phones out there, and even manages to match its successor in most categories. It's available for around £200 less too, making the Galaxy S8 a better-value option than the S9.