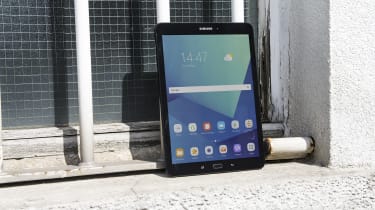 The internal hardware of Samsung's latest tablet isn't quite as cutting-edge as its phone lineup. The Tab S3 offers a fairly standard 4GB of RAM, but it's powered by a quad-core Snapdragon 820 CPU, a spec that's surprisingly underpowered compared to modern smartphones. Compare that to the Galaxy S8's10nm Exynos 8895 CPU, for instance, and the tablet doesn't match up. We'd have liked a little more horsepower behind the scenes, particularly when the Tab S3 is being touted as a business-grade device.

Regardless of this minor disappointment, the Tab S3 performed admirably in its benchmark results, blazing past older rivals like the Google Pixel C and even going toe-to-toe with Apple's new iPad - although it couldn't quite match the latter's multi-core performance. It was also thoroughly trounced in our performance tests by Apple's 9.7in iPad Pro.

In day-to-day use, the Tab S3 proved itself to be snappy and responsive, with no problems switching between apps and handling demanding operations. It may not be as much of a powerhouse as the smaller iPad Pro on paper, but we had absolutely no problems with speed in practice.

It has to be noted, however, that the iPad Pro is actually 50 more expensive than Apple's smaller Pro, despite testing markedly worse for performance. While the Tab S3 racked up scores of 1,675 and 3,803 in Geekbench 4's single and multi-core tests respectively, the iPad Pro 9.7in blazed past it with a single core result of 2,977 and a multi-core score of 4,844. Similarly, Apple's newest (and cheapest) iPad also outclassed it with single and multi-core scores of 2,490 and 4,204 respectively.

It's comfortably ahead of most of its Android-based competition, but it can't touch rival iOS devices.

Battery life is another slightly disappointing area. Despite a larger 6,000mAh battery than its predecessor, a more power-hungry set of internals means that the Tab S3 only managed a score of 11hrs 43mins in our battery tests, lagging around three hours behind both the Tab S2 and Apple's latest iPad. 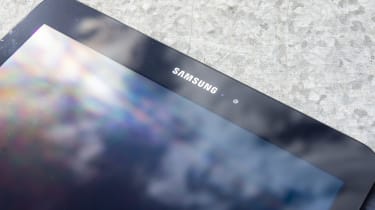 Of course, a score of almost 12 hours isn't exactly anything to be ashamed of, and the Tab S3 will comfortably last you through two working days with change to spare. Moreover, charging it back up again isn't going to prove a problem, as the bundled USB Type-C charger supports adaptive fast-charging.

Like the iPad Pro, the Tab S3 is being marketed as a business device as much as a consumer item, and as such it comes with full support for Samsung's keyboard and stylus accessories. Unlike many manufacturers, Samsung bundles its S Pen stylus with the Tab S3, so you won't have to shell out any extra on it.

Sadly, this is somewhat undermined by the fact that the keyboard case will set you back an additional 119. It's a perfectly good keyboard - easily matching up to, if not bettering, Apple's Smart Keyboard - but it's a tough price to swallow on top of an already high cost of entry.

One of the S Pen's best features is its handwriting recognition, which is excellent - by far the best we've seen. Unlike Windows 10, we found that Samsung's software consistently recognised even our awful chicken-scratch handwriting, with very few errors. It's also got palm rejection technology, meaning that you can use it just as you would an actual notepad and not worry about your palm making contact with the screen - it won't mind at all. 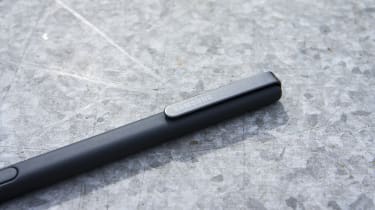 Like S Pens of old, hovering over the screen will bring up a list of 'Air Command' shortcuts, including note-taking, screen-writing and translation. It's not perfect, and is best suited to jotting down short notes rather than long passages or detailed drawings, but it's one of the most fluid examples of handwriting and stylus tech we've seen to date.

The Samsung Galaxy Tab S3 is the best Android tablet on the market by a clear distance. The design is gorgeous, the S Pen is the best stylus implementation ever to grace an Android device, and Samsung's trademark gorgeous display gives you a crisp and clear view of whatever you're doing.

However, while the Tab S3 is undeniably impressive, there's simply no getting away from the fact that it's extortionately expensive for what you're getting - especially once you start comparing it to Apple's range.

Samsung's latest tablet can barely keep pace with the new iPad, but costs over 250 more. Even if you want enhanced productivity features like keyboard and Stylus support, it's still more expensive than the iPad Pro, despite being nowhere near as technically capable.

If you absolutely have to remain within the Android ecosystem, then the Galaxy Tab S3 is the best you can get. For everyone else though, Apple's tablets are better, cheaper and more powerful.

The Samsung Galaxy Tab S3 is the best Android tablet ever made, but an extortionate price tag and slightly lacklustre performance limit its appeal