Both feature a 5in screen, but the Moto C Plus packs in a whole lot more for the money 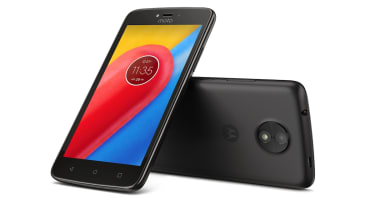 Motorola has cemented its brand as a budget smartphone manufacturer with the launch of the Moto C and Moto C Plus, two new devices that will join its Android line up.

The Moto C will cost 89.99 on Tesco, Carphone, O2 and from Motorola's site, touting a 2350mAh battery, which the company says will be enough to get most tasks done without reaching for a charger. That could well be the case, because there aren't a huge number of bells and whistles packed into its chassis compared with other Android 7 competitors.

The 5in screen has a resolution of  854x480-pixels, while around the back, there's a 5-megapixel camera with fixed focus lens and LED flash,  with a 2-megapixel snapper with flash on the front. Video call quality may not be the best though.

Powering the Moto C is a 1.3GHz quad-core processor and 1GB RAM. There's 8GB of storage on-board (one area where Moto has really stripped back), although there is a microSD card slot for boosting that storage up to 32GB. It's available in both 3G and 4G versions, in metallic cherry, pearl white, fine gold, and starry black colours.

The Moto C Plus is a larger version of the Moto C, with a 4000mAh battery, which Motorola says will last up to 30 hours on one charge. Around the back, there's an 8-megapixel camera rather than the 5-megapixel one available on the Moto C and although the screen size is the same (5in), it's a higher resolution at 1280x720 pixels.

The Moto C Plus will cost 109.99 and can be picked up from Motorola's website or Argos, although it hasn't been announced which networks it will be available on just yet.

Both devices will be available 'this spring' according to Motorola.