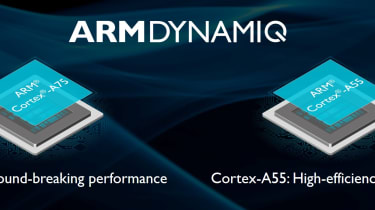 Revealed at the Computex show in Taiwan, the Cortex-A75 and Cortex-A55 systems-on-a-chip (SoCs) should allow manufacturers to put intelligence into the network edge. Both feature ARM's new DynamIQ technology, which sports dedicated instructions for AI performance tasks. It claimed that this technology would deliver a 50-fold AI performance increase over the next five years.

The A75 chip is aimed at high-end smartphones and should see a 22% improvement in single-threaded performance compared to the Cortex-A73 chip. It said the Cortex-A55, with its dedicated AI instructions, would also give a 2.5x performance-per-milliwatt efficiency relative to today's Cortex-A53 based devices.

"The Cortex-A75 delivers a massive 50% uplift in performance and greater multicore capabilities, enabling our partners to address multiple high-performance use cases including laptops, networking and servers, all within a smartphone power profile," said Nandan Nayampally, VP and general manager of ARM's CPU group.

"As such, ARM has a responsibility to rearchitect the compute experience for AI and other human-like compute experiences. To do this, we need to enable faster, more efficient and secure distributed intelligence between computing at the edge of the network and into the cloud," he added.

It also unveiled a new mobile GPU, the Mali-G72. This would be used in IoT devices and would allow the processing of large volumes of machine learning data locally instead of being sent to the cloud. The chip is also tasked with improving the performance of virtual reality and augmented reality. It said the chip would be its "most efficient yet" with 1.4x the performance of the Mali-G71.

The firm said it had lined up "more than 10" licensees for both new processors and its DynamIQ framework, and expects the new CPUs and GPU to make an appearance in the last quarter of this year or early 2018.