iPhone 7 vs Google Pixel: Can Google beat the iPhone at its own game?

Will the Pixel be able to take on the mighty iPhone? 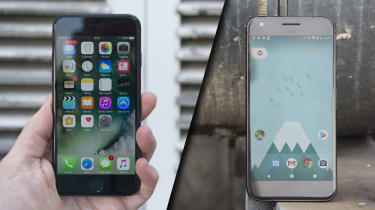 Battery life is possibly one of the most important elements of any smartphone - after all, it doesn't matter how good your phone is if you can't go a full day without it dying. Thankfully, the Google Pixel has you well covered on this front. In our battery tests, it managed to last a whole 16hrs 23mins, which is a very creditable result indeed.

It handily outstripped the iPhone 7, which just limped over the 13-hour mark by two minutes. While this is still a very good result, that extra three hours and twenty minutes is nothing to be sniffed at. In fact, the Pixel will likely serve you even better in day-to-day use, as many of Android's clever battery-saving features (such as Doze Mode) aren't applicable to our tests.

The Pixel also features fast-charging, with Google promising seven hours worth of battery life from just 15 minutes on charge. As an added bonus, it uses USB-C rather than a proprietary charging standard. It's a minor annoyance that Apple still clings to its Lightning port; we still wish that the company would move to a universal standard.

Google's flagship device, like the Nexus range before it, is designed to showcase the best features of the Android operating system. First and foremost of these is the Google Assistant, the company's answer to the likes of Siri and Alexa. The Google Assistant is built into every element of the device, and uses the same core AI as Google Home. Generally speaking, she's more useful than Siri, as she's got the full power of Google's cloud behind her and has more integrations with third-party products and services.

One excellent feature that the Pixel offers is unlimited free photo and video storage via Google Photos - at full resolution. Google Photos already offers unlimited storage, but at a slightly compressed resolution, so the ability take as many snaps as you want with no loss in quality and no storage worries will be good news for photo buffs.

Sadly, as Google takes two steps forward, it also takes one step back with the absence of waterproofing. Full waterproofing has long been one of Android's main advantages over the iPhone, but Google has sadly not included it on the Pixel, opting instead to make it merely 'splash-proof'. This is a particularly unfortunate misstep given that the iPhone 7 has finally added proper IP67 waterproofing to its list of features. 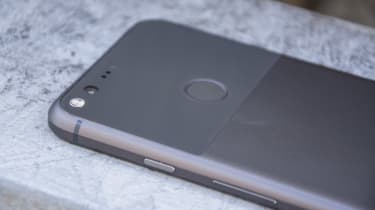 The iPhone also has better software. Although Android has made some significant improvements and no longer trails quite as far behind iOS as it used to, the fact remains that Apple's operating system simply outclasses Google's in its functionality, attractiveness and ease of use.

We would be remiss, however, not to mention the iPhone 7's missing headphone jack. While we don't think it's a hugely big deal, given that we've been using wireless headphones for ages anyway, it may prove to be a dealbreaker for some.

Cameras are often a key differentiator for the iPhone, but this time around, Google is putting up some seriously strong competition. The Pixel's camera is truly staggering, with superior low-light performance, better HDR for difficult lighting conditions and improved EIS in video recordings. While the iPhone 7 still has an excellent camera, the Google Pixel is just that little bit better.

If it seems like the two phones are pretty much equal, that's because they essentially are. While the iPhone 7 is quite a bit faster than the Google Pixel on paper, both are more than fast enough to keep up with even the most demanding of users. The same is true of the screen - although the Pixel's specs would lead you to believe it's a superior display, in practise the actual difference is minimal.

In other areas, however, the Pixel absolutely shines. Its additional battery life, extra features and absolutely breathtaking camera give it a slight edge that allows it to pull out in front of the iPhone 7. It's a close call, but Google has managed to do the seemingly impossible, and build a phone that beats Apple at its own game.

Although the iPhone 7 and the Google Pixel are almost neck-and-neck in most areas, a better battery life and an amazing camera are enough to seal a win for the Pixel.