Google brings wearable back from the dead with business-focused successor 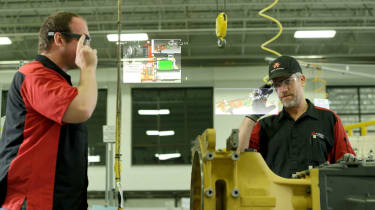 Google Glass is officially back from the dead, after the company launched a long-awaited second version of its augmented reality headset targeted specifically at business users.

The second iteration of the company's wearable, dubbed Google Glass Enterprise Edition, sports a number of improvements over its predecessor that target various industries and verticals.

"We've also made improvements to the design and hardware so that it's lightweight and comfortable for long term wear," the company wrote in a blog post announcing the new device. "We've increased the power and battery life too."

Google initially launched an early pilot of the device in 2014 - the Google Glass Explorer Edition - which was pulled from sale a year later after it met with a lukewarm reception from consumers. Many dismissed the wearable as a privacy-invading gimmick.

Rumours of a more enterprise-focused successor circulated following its demise, fuelled last year by the appearance on eBay of an early prototype for a second-generation 'Enterprise Edition' headset.

Google Glass Enterprise Edition is being marketed specifically at businesses such as manufacturing and engineering, where having to follow specific, rigorous processes can result in a lot of time spent checking manuals and instruction documentation.

By using Glass to place these instructions directly in the user's eyeline, complete with rich media like animations and video tutorials, customers like GE, Boeing and Volkswagen have reported efficiency gains of around 10% in some cases, as well as a general reduction in errors.

Agco, an agricultural equipent manufacturer, has been using Glass for two years in its factory to cut inspection times by 30% and train staff three times faster.

Peggy Gulick, Agco's director of business process improvement, said: "We found the greatest value from using Glass has been in the assembly and quality areas, through the easy and quick hands-free access to the instructions and checklists necessary to assemble our individually designed tractors. We have seen a significant increase in productivity, and our factory employees have reported being much happier doing their jobs."

Wearers can also use voice activation to launch apps if they're working with both hands, and it also supports live video, for first-person troubleshooting and collaboration with colleagues working remotely.

The use case is strikingly similar to Microsoft's HoloLens headset. Much like Google Glass, HoloLens is also framed primarily as a collaboration and productivity device, with real-time collaboration and training highlighted as key use-cases.

Google is also aggressively targeting verticals like healthcare and logistics. However, rather than selling Glass directly to customers, Google is instead pursuing an entirely channel-based sales strategy, offering Glass through more than ten key industry partners across various vertical markets.

The tech giant said it has more than 50 customers using Glass within their businesses as part of an early preview programme. Whether it has more success than its consumer-focused predecessor remains to be seen.