Refresh this page every 10 minutes to get our latest blog updates!

Apple's special event is extra special this year - it marks 10 years since the launch of the first iPhone back in 2007.

Accordingly, buildup for the event has been more frenzied than ever before, with rumours exploding left, right and centre about the devices Apple is expected to launch in Cupertino tonight.

Chief among these it is 10th anniversary iPhone, the iPhone 8 - or, as it's more likely to be named, the iPhone X.

We'll go into more depth on the new iPhone and more below, but first, let's discuss how you can watch the Apple 12 September Special Event livestream.

Phil Schiller introduces AirPower, Apple's own wireless charging pad that you can use to charge the iPhone X, the iPhone 8 and the Apple Watch 3. 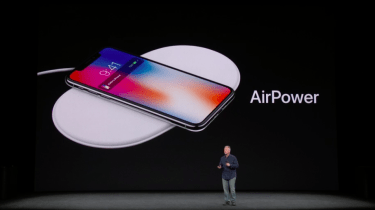 Another accurate rumour appears to be that Apple has experienced some serious supply chain issues with the iPhone X - it's not available for pre-order until 27 October, available from 3 November.

By the looks of it, the X is the ultimate status symbol, and it's priced accordingly. 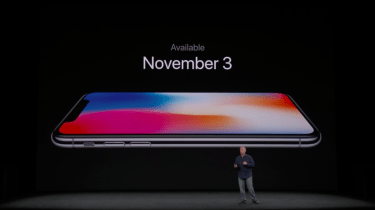 Apple introduces the iPhone X, which - yep - has Face ID. As we predicted, Face ID appears in the iPhone X (pronounced 'ten'), relying on the X's A11 Bionuc neural engine to recognise your face. "Face ID learns your face, even if you change your hairstyle, put on glasses, or wear a hat," says Phil Schiller. 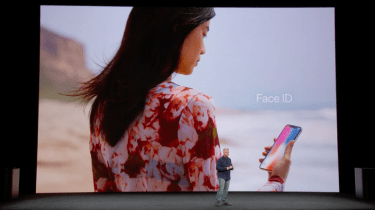 It works in day or night, with Apple having trained neural networks on one billion images to make sure Face ID will recognise you, and only you.

Apple's so keen to convince us of Face ID's security that it says that while Touch ID was secure enough that just one in 50,000 people could break into your phone, Face ID is more like one in 1 million.

The iPhone 8 and 8 Plus will come in 64Gb and 256GB, and will be available to pre-order from 15 September, and available from 22 September.

Incidentally, iOS 11 is coming out on 19 September. 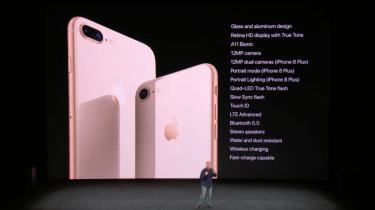 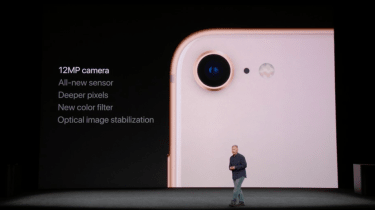 No device has changed the world more than the iPhone, where the hardware "virtually disappears", reckons Tim Cook. "The first iPhone forever changed how we interact with technology by introducing multi-touch," he points out, calling it "magical". It certainly was transformative, as we touch on in our look at the iPhone's 10th anniversary.

Can the iPhone 8 be as innovative and iconic?

Well, the iPhone 8 and 8+ will boast glass fronts and backs, Apple boasts.

Meanwhile the iPhone 8 will boast an A11 bionic chip - something Apple says is the most powerful smartphone chip ever.

The iPhone 8 even lets you take augmented reality pictures, Apple says. The A11 chip means you can play games that introduce CGI into the real world through the iPhone camera. One cool app lets you look at the star constellations by viewing the sky through your iPhone.

Apple TV is better than ever, now, with a 4K HDR model coming out. Boasting an A10X Fusion chip, it's twice as fast as the last Apple TV and graphics are four times faster.

Live sports are coming to Apple TV too, says Eddy Cue, senior vice-president. Live news is coming to the TV app as well, and Cue really pitches TV to iPhone and iPad owners to play videos and show pictures on.

New games are coming to Apple TV too, of course - one of those is a lovely-looking game of flying over clouds by ThatGameCompany. 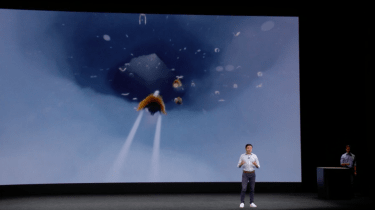 The point is to show off how the A10X Fusion chip can support such beautiful graphics, making Apple TV a pretty decent contender as a sociable, lightweight games console.

Apple TV will cost $179 and you can order it from 15 September, shipping one week later.

Williams adds it has 18 hours battery life, and the cellular model will cost $399, compared to a Series 3 without cellular connectivity, which costs $329. 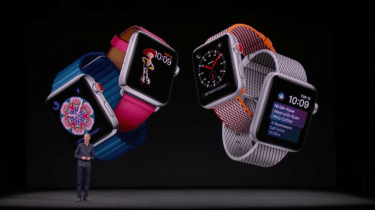 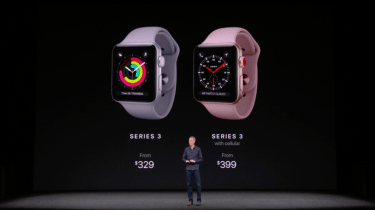 You can also get a Gold Aluminium colour band, in addition to the existing colours, and a set of new SportyLoop flexible bands.

18:19: Apple Watch 3 is the first up for discussion today. Tim Cook starts by telling us Apple Watch is the most popular watch in the world, and that it grew over 50% last year with a customer satisfaction rate of 97%. 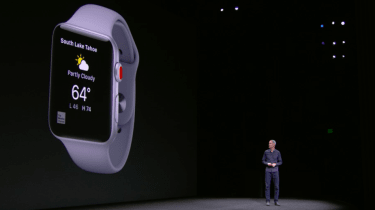 18:28:The Apple Watch 3 is coming, Cook confirms, inviting Jeff Williams, COO, on stage to talk about it more.

Williams runs us through WatchOS 4 updates, which will be available from 19 September, before introducing the Apple Watch 3 with a surfing video.

"Cellular in Series 3 makes Series 3 the ultimate expression of Apple Watch," Williams boasts. He says you can take calls on your Watch using the same number as your iPhone

Siri can talk on the Watch 3, which runs 70% faster than the Series 2, according to Williams. Adding cellular was a challenge, though, says Williams, who worried that it could look like a "house arrest bracelet" with all the extra kit inside.

Instead, Apple used an electronic SIM to cut down on its size, bearing in mind it also contains an altimeter now as well. Astoundingly though, the casing is the same size as the Series 2.

CEO Tim Cook is on stage at the Steve Jobs Theater in the company's new campus, saying: "It's only fitting that Steve should open his theatre," after we heard from Jobs himself in a voice over. 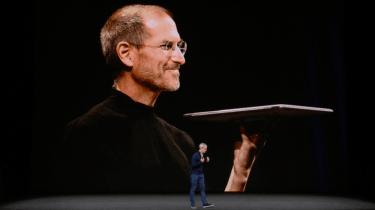 "He believed [our surroundings] should inspire talented people to do their best work," continues Cook, revealing that Jobs had started working on the idea for Apple Park more than a decade ago. "Steve's vision and passion live on here at Apple Park and everywhere at Apple," Cook adds.

How to watch Apple's livestream

Apple is hosting its annual device extravaganza in its new spaceship-shaped headquarters, named Apple Campus, at 1 Infinite Loop. The keynote will take place at the Steve Jobs Theater, aptly so considering the late CEO's role in developing the iPhone.

If you have a MacBook, iPhone or iPad, you can head straight here https://www.apple.com/apple-events/september-2017/ to watch the keynote live from 6pm BST (or 10am PDT, which is local time).

To watch Apple's livestream, your Apple device will need to run Safara on iOS 9.0 or later, or macOS v.10.11 or later.

Alternatively, and for the first time, Apple's relations with arch-rival Microsoft have thawed sufficiently for Apple to allow Windows 10-running PCs to stream the keynote, too.

Alternatively, if staring at grey-haired white men for hours at a time isn't your thing, we'll happily do it for you, and report the highlights right here on this page via our live blog. Starting at 6pm sharp, we'll take you through all the major announcements from the show, and run you through all the devices, their specs and key features, and when they're coming out.

Just refresh the page periodically to get our latest updates.

You can also follow us at @ITPro on Twitter to check out everything as it happens live.

Read on for what we think is likely to be announced tonight.

The most credible rumour is the release of the iPhone 8.

Thanks to a huge leak of iOS 11's Golden Master code over the weekend, we know an awful lot about Apple's new iPhone before it's even launched.

An Apple employee allegedly spilled the code to several news sites, despite Apple's recent crackdown on leaks. For a start, it means we can say the iPhone 8 will actually be called the iPhone X - apparently standing for 'expensive' (actually for 'exclusive') - and that it will almost certainly include Face ID - a facial recognition technology.

It may lose Touch ID, its fingerprint scanner, which Apple has apparently had trouble integrating with its new OLED screen.

Losing the home button is also likely, but this is nowhere near as popular a feature as wireless charging - which our own snapshot Twitter poll found 90% of recipients would prefer.

What would you prefer from the #iPhone8

The iPhone 8 is expected to include a host of new features, including 3D facial recognition, augmented reality (AR) and mixed reality (MR) capabilities, and a software-based home button.

You can find more comprehensive coverage of what to expect from the iPhone 8 on our dedicated hub.

Rumour: iPhone 8 and iPhone 8 Plus will also launch

While not as strong as the rumour of the iPhone X, it wouldn't be a surprise for Apple to update last year's iPhone 7 and iPhone 7 Plus. This is particularly likely if a) the iPhone 8 is a giant leap forward compared to the iPhone 7 and b) it's expensive as has been rumoured (in the region of 900).

On the other hand, it would mean Apple releasing three iPhones at the same time. Including the iPhone SE, that would bring the total number of iPhones on the market to four. However, rumours suggest Apple will drop the 's' branding and instead of bringing out a 7s and 7s Plus, the new models will become an 8 and 8 Plus.

It's been over a year since the release of the iPhone SE Apple's 4in smartphone brought in to replace the dinky iPhone 5s and that's a long time in tech.

Although the SE isn't a top-of-the-range product and was never marketed as such, it could still do with an upgrade.

That being said, the company kept the launch of the original SE separate from those of the flagship iPhone 6s (September 2015) and the iPhone 7 (September 2016), possibly because it didn't want to muddy the waters of the annual iPhone spectacle by launching a 'budget' phone at the same time.

Consequently, we may have to wait until 2018 for a new SE.

Brazilian tech site iHelp BR(translated by IT Pro), first reported that some Apple developers had noticed "references to some new types of exercise for the Apple Watch - for example, skiing".

The site claimed to have confirmed this by looking in the "internal archives and codes of iOS 11".

"We found a range of icons that are used by the Apple Watch's Exercise app that don't appear in any of the current versions of the watch, even the most recent version of the Apple Watch," it said. "Therefore, we suspect that they will be exclusive to the new generation of Apple Watch, which must be announced soon."

Other rumoured new features include an LTE/4G upgrade, increased battery life and a camera.

With a swathe of new iMacs, Macbooks and iPads released at WWDC 2017 in June, including an update to the MacBook Air, 12 September is too early for a hardware refresh on these lines.

It's always a rumour, but it's not going to happen. Not this year, anyway.