The IT Pro view: What the iPhone 8 will (probably) look like 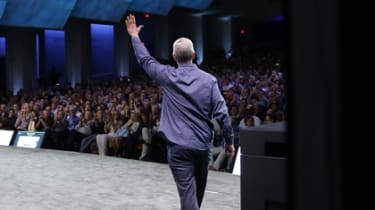 Apple's launch of its 10th anniversary iPhone may not even come out this year, according to various rumours pointing to production delays.

But whenever it is released, you can be sure that the iPhone 8 will prove more of an upgrade on Apple's flagship design than the iPhone 7 did last year, when waterproofing was the only genuinely new feature, and we all mourned the loss of the headphone jack.

Ahead of next week, team IT Pro has pored over the iPhone rumours and speculation to focus on the most reliable or consistent reports, aiming to paint a picture of what new features the 10th iPhone is likely to offer - and whether that makes it worth upgrading, or rolling the device out to your employees.

All signs point to the 10th anniversary iPhone featuring the biggest, loveliest screen Apple has ever put on an iPhone. It will reportedly use an edge-to-edge OLED panel, similar to the one used by Samsung in the Galaxy S8. If true, it'll be the most radical redesign since the iPhone 6's rounded body. It's about time, too - the iPhone's ginormous bezels have left it trailing behind its Android competitors for years.

The feature I'm most looking forward to is wireless charging. Rumours indicate Apple will be adopting the Qi charging standard - the universal standard used by manufacturers like Samsung and Lenovo. Not only will this mean that Apple and Android charging accessories will be cross-compatible for the first time ever, it's also likely to be the kick up the backside that the rest of the industry needs to finally adopt wireless charging en masse.

Augmented Reality (AR) is going to be a bit part of the newest iPhone, too. Apple made a big deal about its ARKit SDK at WWDC in June, so expect there to be a significant focus on how well the next iPhone handles AR apps. Hopefully, this will extend to more than just Snapchat-style filters, though.

I'm not expecting the iPhone 8 (or whatever it ends up being called) to change much in terms of appearance - we've got to the stage where smartphones are pretty much as thin and as large as they can comfortably be. But that doesn't mean it will be identical to its predecessors; it's what's on the inside that counts, after all.

I'm certain we can expect an upgraded camera from the new iPhone, with the likes of the Huawei P10 giving the iPhone 7 a real run for its money, and probably five colours (silver, black, rose, gold, space black).

One thing I would like to see is wireless charging technology in addition to cable-based charging. Wireless charging isn't much use if you're out and about, but if you're working remotely at home, in a caf or other location that has wireless charging pads, it's a great idea. If Apple goes this route hopefully it won't try and enforce some kind of proprietary technology, but this is Apple we're talking about...

If Samsung's S8 has taught us anything, it's that more glass is the way forward. The iPhone 8 is going to be Apple's attempt at this, so we're likely to see a highly minimal approach to its design - a scrapping of the physical home button and, despite its technical troubles of late, an integrated fingerprint scanner built into the screen.

Other changes will almost certainly include all the typical upgrades we'd expect on a new flagship. A more powerful camera, beefier internal hardware, and a handful of fancy software additions.

Rumours suggest the iPhone 8 may feature some of the fastest facial recognition technology to date, which would certainly be a welcome addition. The issue right now is that unlocking your device using your face is just far too clumsy - it's either too inaccurate, or takes longer than it would to just manually unlock with a code or swipe. Aside from the added security that biometrics can bring, it would simplify the process of unlocking your phone to a simple glance at a camera.

While everyone is focused on the outside, physical appearance of the new iPhone, I think Apple might be planning something spectacular for its insides. I'm talking about it's internal memory, where rumours are floating about that it might have a humongous 512GB storage. This would appeal to customers who are consistently running out of memory after snapping too many pictures of their pets and meals.

What would I like to see? I want Apple to come out with some new AI technology for its camera that can tell what's in your images. That way, it can tag and organise them by where they've been taken, what's in them and ask users what to do with them. More memory means you can store more images, which shows how important this feature could be.

Tim Cook said that Apple's AI was applicable to more than just cars, so this would be an excellent surprise for iPhone users.

People say you're never more than three clicks away from an iPhone rumour in September. The latest, that the iPhone 8 won't include Touch ID, might come as an unwelcome surprise to enterprises with Apple deployments.

As Dale points out above, faster and more secure facial recognition technology could make opening your iPhone far more convenient. However, the existing technology available on Samsung's Galaxy S8 and other devices can have difficulty recognising a person properly, and there remains hacking concerns - hardly ideal for employees storing company files on their devices.

With Apple planning to ditch Touch ID altogether (according to the Wall Street Journal) in favour of facial recognition, it may be better to rely on four-digit passwords after all: if the FBI can't hack them, criminals will likely have a tough time as well.

When Apple joined the Wireless Charging Consortium back in February, it became pretty clear the iPhone 8 will feature some form of cordless charging capability.

But, according to Macotakara, Apple will work hard to make a proprietary version of the Qi universal technology standard for wireless charging, just so we all have to buy charging pads. For anyone who thought last year's removal of the headphone jack, forcing people to use Apple's charging port instead, was a one-off, it's now clear that Lightning can strike twice.