BlackBerry to launch Android phone with no keyboard 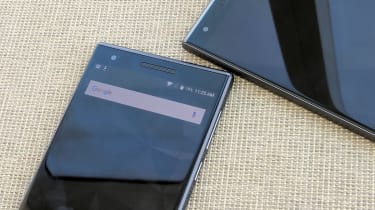 BlackBerry has unveiled its new flagship phone that goes all-in on the touchscreen and dumps the vendor's usual physical keyboard.

Officially announced at the GITEX Technology Week, held in Dubai, yesterday, the Blackberry Motion is an Android-powered full touchscreen device made by TCL.

While Blackberry did not have much input on the design of the product, the phone will feature its Enterprise Services. Out of the box, the phone runs Android 7.1 Nougat, but will get Oreo in the new year.

Alongside the battery, the phone comes with Qualcomm Quick Charge 3.0, which enables up to a 50% charge in roughly 40 minutes using a USB Type-C charger. There is also a fingerprint sensor on the front of the device, which also doubles as a physical home button.

The Motion is also the first Blackberry device to be IP67 dust and water-resistant. Camera-wise, it has a 12MP rear camera with an f/2.0 aperture along with an 8MP front-facing camera.

A new security feature called Locker enables users to store documents and photos to an internal storage area that requires the device owner's PIN code or fingerprint to access. Locker Mode allows customers to capture images and directly save those photos to the internal storage area, so they are not automatically saved to a cloud service.

"The launch of BlackBerry Motion allows us to further diversify our product offering, delivering new experiences while remaining steadfast with the privacy, reliability and productivity that have made BlackBerry so iconic over the years," said Alain Lejeune, global general manager for BlackBerry Mobile.

At present, the Motion is only available for pre-order in the United Arab Emirates and Saudi Arabia. No price has been given nor has availability for other markets.