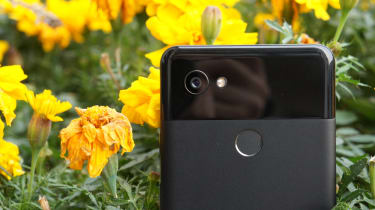 The Pixel 2 XL packs the same hardware as the Pixel 2 - a Qualcomm 835 chipset paired with 4GB of RAM - and it delivers the same level of performance.

In our Geekbench 4 tests, the Pixel 2 XL scored 1,895 in the single core test, while the multicore score was a very decent 6,263. This is pretty much around the same performance as the Galaxy Note 8, which like the Pixel XL 2 has a octa-core chip.

But these benchmarks don't do justice to how well the Pixel 2 XL actually performs, thanks to the fact that it's optimised to run near-stock Android Oreo. Google has put in a lot of work to making sure that in practice, the Pixel 2 XL is buttery-smooth to use. The only change that Google has made to the base OS is that it's added the Pixel Launcher on top, which adds a few light interface additions, such as app tray and the ability to quickly launch the calendar app from tapping on the data on the home screen.

With the Pixel Launcher on top of Android Oreo, Google is presenting its best vision of its mobile OS, and with the Snapdragon chip, everything from browsing multiple web pages to watching video and using services like Slack at the same time is very slick indeed, and we encountered no slowdown despite running multiple apps and multitasking.

According to our benchmark testing, the 3,520mAh battery delivers just over 15 hours of power, but in real world use this can vary. On a full charge the handset's battery can last more than a day with average use ranging from web browsing and messaging to watching the odd video clip on social media. 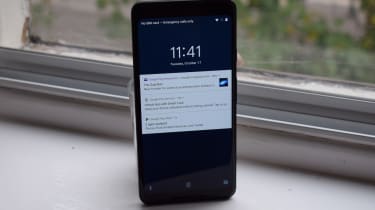 Heavy use of the phone with its display on full brightness will see the battery drop. For example, we saw our handset bleed 5% of its battery life after 10 minutes of heavy use, which included opening multiple apps and watching videos. Use the Pixel 2 XL heavily for a working day and you'll be reaching for the charger come the late evening, which is about on par with the Pixel XL and other powerful smartphones.

There's a power saver mode which aims to get more life out of the battery by reducing performance and background services. However, when we engaged the mode and kept using the handset we noticed a drop of 4% over ten minutes of continuous use, which we feel wasn't worth the dip in performance which makes flicking through Android feel a little jerky. That being use handset lightly when in power saving mode and the battery life is can keep going for well over a day and a half.

Fast charging is on offer as well and can give the Pixel 2 XL enough juice in 15 minutes to last an evening of emails and web browsing, which is more preferable than trying to eke out every last drop of battery life.

Aside from the stereo speakers and Active Edge, the Pixel 2 XL is a tad light on standout hardware features. It has an electronic SIM which allows for connection to Google's Project Fi network without a SIM card, but this is sadly limited to US users.

It's on the software side that the Pixel 2 XL has brought out the big guns, in the form of the Google Assistant and its machine learning smarts. We've had the Google Assistant in our lives for a year now thanks to the previous Pixel phones, and it has proved to be the smartest mobile virtual assistant when pitted against the likes of Siri and Cortana.

Like its smaller sibling, the Pixel 2 XL comes packing an even smarter Assistant. You can now ask the Assistant to listen to songs and identify them, where previously it was limited to the Google voice search app.

Even more impressively, the song identification happens automatically with the always-on ambient display mode, which not only automatically identifies songs played in the phone's vicinity but also displays notifications on the lock screen without needing a user to pick up or unlock the phone, essentially providing snippets of information at a glance. It's a neat feature and didn't appear to have much impact on the battery life, though some may find a display that's partially on all the time to be a distraction. 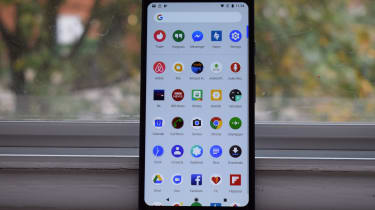 Other smart tools include the debut of Google Lens, which uses the search giant's machine learning expertise to identity what's in a picture and serve up relevant information. Snap a picture of a book cover and Lens, which is built into the camera and will soon come to the Assistant, will serve up snippets of information about the book and its author.

Lens is far from infallible and trips up a fair bit, but it has real future potential for using computer vision to serve up genuinely useful information to a user, rather than forcing them to rely on search-powered guess work.

Overall, the Pixel 2 XL simply feels like a very smart phone; little snippets of information are served up seamlessly and rapidly based on how the Google apps and your Google account are used.

Some may be put off by having Google's algorithms effectively watch them, but those who are less concerned will be able to experience a phone that feels like it's a vehicle for practical machine learning, rather than just another phone for snapping slightly better selfies.

This review was originaly published on 17/10/17 but has been updated most recently on 02/02/18 with our latest thoughts on our review handset.