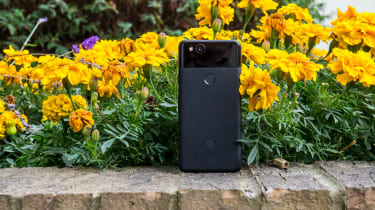 The camera on the Pixel 2 has been improved, build-in upon the impressive photography capabilities of its predecessor.

On paper, the 12.2MP f/1.8 aperture rear-camera is nothing special, but the results it delivers are. Even photos snapped at speed with little concern for focus points still present detail rich pictures, with more vibrant and accurate colours over the original Pixel's already excellent photography chops.

The difference between the old and new Pixel phones is not night and day, but there's no doubt the Pixel 2 offers a superior smartphone camera.

Rather than go for a dual lens camera array, Google makes use of dual-pixel phase detection, which means every pixel in the lens is made up of two smaller ones. With the use of machine learning, the Pixel 2 effectively overlaps multiple shot to deliver the best possible photo with plenty of depth and detail.

This technique also crops up in the new 'Portrait' mode which blurs the background of a portrait photo while keeping the subject in sharp focus. Working on both the rear and front-facing 8MP camera, the machine learning can serve up nice 'bokeh' effects in portrait photos, and is genuinely impressive to view while being intuitive to use. 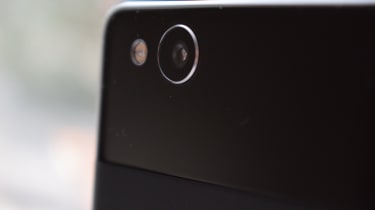 In fact, machine learning filters into all areas of the Pixel 2's camera setup. Optical image stabilisation is now added into the mix alongside electronic image stabilisation, which can not only improve low-light photography but also be combined to make shooting video smoother, by having smart algorithms to combine the two stabilisation techniques and iron out any jerky hand movements and jitters when filming.

The technique works admirably too, delivering smooth videos even from shaky one-handed shooting. However, when blown up and viewed back, video captured at 4K/30fps lacked finer detail when compared to the original Pixel. This was disappointing, but suggests there's likely a problem with software compression rather than with the camera itself, given the still shots it takes are superbly detailed.

Hopefully Google will patch this pretty quickly, as if the problem is fixed then the Pixel 2 will have one of, if not the best smartphone cameras around.

In many ways, the Pixel 2 is a little disappointing; it has a slightly dated design for a phone making its debut at the tail end of 2017. While the hardware is powerful and in keeping with the standards of other Android smartphones, and the handset is well built and lovely to use, it still feels a bit out-of-touch.

The flipside to this is the Pixel 2 is a joy to use. With unfettered Android Oreo and the intuitive and slick Pixel Launcher, the Pixel 2 is less of an Android mobile and more of a Google phone, presenting the search giant's mobile OS in the best light possible.

Moreover, with the Google Assistant and its machine learning-powered features, the Pixel 2 genuinely feels like a smartphone that's actually smart and will continue to get smarter over time. 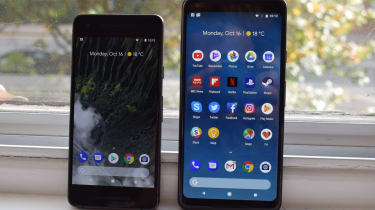 For business use, the display feels a little small, due to being flanked by its chunky bezels and by 2017 standards it is perhaps not the productivity powerhouse of phones like the Galaxy Note 8 with its phablet footprint. But its smart features, superb camera and slick user experience go some way to compensate.

The real problem for the Pixel 2 is its high price. For the 64GB model you'll need to part with 629, while 729 will get you the 128GB handset. That's only 10 shy of the innovative Galaxy S8 at launch, and considerably more than the 449 OnePlus 5, a mobile with the same processor, Google Assistant, and software that arguably improves upon base Android.

As such, the Pixel 2 is expensive for the hardware it offers, and even though its presents the best take on Android around, we don't feel it justifies its steep price tag - unlike the Galaxy S8 with its Infinity Display and exclusive Bixby virtual assistant.

Die-hard Android fans will already be champing at the bit to get the Pixel 2 or the Pixel 2 XL. However, for people who are happy to wait patiently for the new, smarter Google Assistant features to roll out onto other Android handsets, the Pixel 2 doesn't offer enough over the other Android flagships from 2017 to justify its current high-price.

Nevertheless, the Pixel 2 is still an excellent smartphone, and while it can't quite hit the high notes in terms of design, which make rival handsets more appealing, it shows that Google is serious about its own hardware and promises a bright future for the Pixel 3.

In a vacuum the Pixel 2 is a great Android smartphone, with a vibrant display, and a solid construction with innovative squeezable edges. However, in the face of stiff competition from Samsung, LG and OnePlus, the Pixel 2 looks outdated, with only its excellent camera and lovely Android experience making it noteworthy.