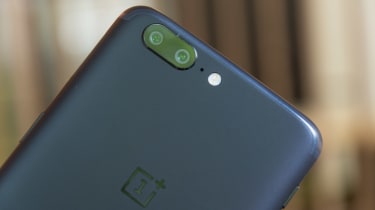 New leaked images suggest that the launch date for the OnePlus 5T will be 16 November.

An anonymous source provided GizChina.IT with a leaked image of the presentation slides for the new device. On the image it says: "Launch Live Event on 16th November."

Unfortunately, the date of sale is censored out of the image.

The slide also states under the title of the device: "Larger display. Same footprint."

It also appears to be an 'Amazon Exclusive' but this apparently refers to the Indian market, which is what happened to the OnePlus' predecessor too.

This is further backed up by Evan Blass, known for his phone leaks, who wrote on Twitter this week that he has had two reliable confirmations that the device will be released on 20 November.

Furthermore, this date would be similar to the OnePlus 3T launch date which was 15 November last year.

A teaser shot for the new device was spotted earlier this week on Android Authority (see below) which showed one corner of the phone with the rest of it covered in darkness. The image showed an edge-to-edge display with the OnePlus' distinctive 'never settle' branding as well as the same speaker grille that the OnePlus 5 has.

Rumours of the OnePlus 5T's imminent arrival continue to circulate after further images of the device were leaked.

After fans allegedly spotted a promo page for the phone on OnePlus' website yesterday, a teaser shot for the new device was leaked to tech blog Android Authority.

The photo, in which all but one corner of the phone is shrouded in darkness, shows an edge-to-edge display, along with OnePlus' distinctive 'never settle' branding and the same speaker grille as seen on the OnePlus 5.

While OnePlus has yet to publicly confirm the photo's authenticity, the teaser has a lot in common with the look and feel of promotional materials for the Chinese company's previous phones. It also chimes with previous leaks regarding the allegedly-forthcoming OnePlus 5T.

Android Authority claims that this latest OnePlus 5T leak has come from "a trusted source", but as with any leaked pre-release image, should be taken with a grain of salt until OnePlus formally announces the OnePlus 5T's existence.

Rumours suggest that the OnePlus 5T will be largely similar to its predecessor, with the primary change being a larger display with narrower bezels and a relocated fingerprint sensor - most likely to the rear. Other minor upgrades that have been mooted include a higher-quality camera and a bigger battery in order to power the larger screen.

Most pundits are expecting the OnePlus 5T to be announced at some point in November, which coincides with when the OnePlus 3T was launched last year. A price increase could also be on the cards, drawing the once-affordable range ever closer to the territory of premium flagships.

Rumours suggest that OnePlus may be about to launch an updated version of the OnePlus 5, featuring an edge-to edge display, after promotional material was reportedly published on the company's website.

The Chinese phone maker is widely expected to announce the OnePlus 5T, a follow-up to its latest device, in the coming weeks. No official confirmation has been issued by OnePlus, but an eagle-eyed fan on Chinese social network Weibo supposedly spotted a page on its site that was published by mistake.

The page, which was promoting the OnePlus 5T, featured images of the device and bore the slogan "Larger screen. Same footprint". If accurate, the leaks indicate that OnePlus has followed in the footsteps of companies such as Samsung and Apple, developing a device with ultra-slim screen bezels and an 18:9 aspect ratio.

Aside from the larger screen, the OnePlus 5T is unlikely to see many additional upgrades over the OnePlus 5, as it already has a cutting-edge Snapdragon 835 processor and a generous complement of RAM. There may have been improvements to the camera hardware, however, as links leading to a promotional page for the phone's dual camera are also prominently featured in the navigation bar of the leaked page.

The company is also likely to have been forced to relocate or abandon the OnePlus 5's fingerprint reader, as the newly-enlarged screen has no space to accommodate the sensor. The most obvious option is to move it to the rear of the device, as Samsung has done with the Galaxy S8's fingerprint reader, but OnePlus could also have removed it altogether in favour of an alternative biometric security method such as facial or iris recognition.

As always, these leaks should be taken with a substantial grain of salt. If they are accurate, we would expect OnePlus to confirm the details of the OnePlus 5T within the next few weeks, and fans are encouraged to keep their eyes peeled.