iPhone X review: the best iPhone ever, but not good enough

Apple's revolutionary iPhone has already been left behind 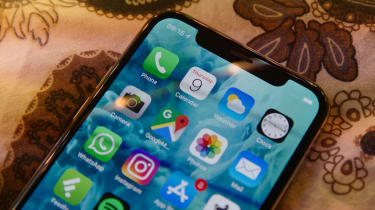 It should come as no surprise that this phone is the fastest we've ever seen. Just like the iPhone 8 Plus, the iPhone X is powered by Apple's A11 Bionic processor, with 3GB of RAM and an M11 motion coprocessor for added oomph.

As a result, the iPhone X's performance is blazing. Its scores in our benchmark tests were more or less equal to the iPhone 8 Plus (although it was very slightly slower at multi-core operations) but it's measurably faster than the rest of the competition. It's considerably ahead of Samsung's current crop of flagships, scoring more than double what the Galaxy S8 managed in our single-core tests.

Battery life isn't quite as rosy, however. In our video playback tests, the iPhone X managed to go just 9hrs 22mins before dying - significantly behind what we'd expect from a 2017 flagship. The iPhone 8 Plus, for instance, lasted nearly 14 hours.

We suspect this is due to the large, power-hungry screen sucking up the charge, but it's possible that this result is deceptive - we've experienced a discrepancy between test results and real-world battery performance before with phones like the original Google Pixel. We'll update this once we've had time to use it for a longer period.

Thankfully, Apple has finally added wireless charging, meaning that topping back up should be smooth and hassle-free. Even better, it's based on the universal Qi standard used by Samsung, Lenovo and others, rather than a proprietary method. We're hoping this is the kick up the backside the rest of the industry needs to start adopting wireless charging - it's an incredibly convenient feature that has been unfairly overlooked for far too long.

A superb camera has long been a staple of the iPhone range, so it's heartening to see that the iPhone X's snapper is still as good as ever. It's using the familiar dual-lens layout, with two OIS-enabled 12MP lenses - one f/1,8 wide-angle lens and one 2x telephoto lens.

Performance is once again excellent in both bright and dim lighting conditions and while it can't quite live up to the Pixel 2's world-beating camera, it's certainly up there with the best of them. There's also a number of nifty software features, such as support for bokeh-style portrait mode shots via the front-facing camera and 'portrait lighting' to digitally simulate different lighting conditions.

There's also 4K video recording with built-in video stabilisation. If your main interest in the iPhone X is for photography, you definitely won't be disappointed - although we'd still recommend the Pixel 2 for the truly snap-happy user.

The loss of the home button also means the loss of the Touch ID sensor, which brings us to another of the iPhone X's shiny new features - Face ID. Using Apple's new 'TrueDepth' camera system, this new facial recognition technology allows you to unlock your iPhone just by looking at it, as well as authenticating Apple Pay purchases. 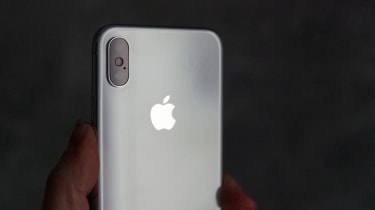 The face recognition is smooth and speedy; registering your face takes mere seconds, it can recognise you with or without glasses and it even performs well in low-light conditions. It also powers the 'Animoji' messages, which allow you to record messages in the form of a poop emoji, among others. As facial recognition technology goes, it really is rather impressive.

There's a slight flaw in its implementation, however. Face ID doesn't unlock the device instantly; instead, you have to wake the screen, look at the phone to authenticate your identity, and then swipe up from the bottom to actually open up the device. This adds a couple of extra steps compared to Touch ID, and feels noticeably less smooth and intuitive. It's also a bit of a pain for Apple Pay transactions, which also now involve an extra step.

Apple has also jumped on the augmented reality bandwagon, and the iPhone X features support for all the various AR games and experiences on the App Store. While these can be a fun diversion to while away a lunch break there's little of genuine interest here.

The iPhone X is without doubt the best iPhone Apple has ever produced. Even if it's not the groundbreaking feat of engineering that Tim Cook would have you believe, it's still an incredibly impressive device on paper.

Here's the problem, though; there's nothing particularly special about it. It's unique within the iPhone family, to be sure - it's the first ever iPhone to feature facial recognition and an edge-to-edge display, for one thing - but all of its tentpole features are party tricks that the likes of Samsung and Huawei already have.

Couple that with the fact that the iPhone X costs almost 1,000 for the basic 64GB version, and this phone starts to look laughably overpriced, even by Apple's lofty standards. For the price of an iPhone X, you could pick up a Samsung Galaxy S8 and a Vodafone Smart V8 to use as a backup - and you'd still have more than 250 left over.

This insanely high price makes it a tricky proposition for businesses, as well. While the facial recognition technology may be attractive for organisations with high security requirements, it's lacking the business-specific features boasted by Samsung's flagships like DeX and in-built MDM support. It's also a significantly larger investment, comparatively.

The rest of the market has caught up to Apple in a major way. As its competition gets slicker and more refined, Apple looks more and more likes it's being left behind by its rivals. The iPhone X is the best iPhone ever - but that doesn't mean what it used to.

The iPhone X is far and away the best iPhone that Apple has ever made. But with such an exorbitant price and such such stiff competition from the likes of Samsung and others, the iPhone X doesn't distinguish itself enough to earn a full recommendation. It's the best iPhone ever - but it's not the best smartphone.