The company is shutting down its ancillary services, starting with BlackBerry Travel and Playbook 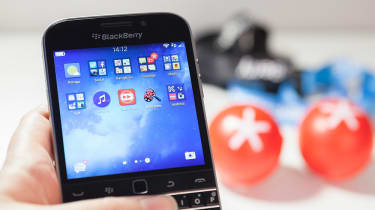 BlackBerry has put yet another nail in the coffin of its BBOS smartphone line, with the news that the company will be shutting down the BlackBerry app store by December 2019.

First on the chopping block are the BlackBerry Travel and BlackBerry Playbook apps, which let you use your BBOS device to plan trips and videoconference respectively. BlackBerry Travel will be discontinued in February next year, with Playbook following suit the month after.

They will be followed by the company's BlackBerry World app store, which shuts down on 31 December 2019, a little over two years away. BBOS Customers won't necessarily be left out in the cold, however; the Amazon Appstore is included with BBOS 10, allowing customers to download a limited (but still fairly robust) selection of Android apps, and BlackBerry has not confirmed whether or not this will still be operational following BlackBerry World's closure.

To assuage nervous BBOS users, BlackBerry has promised customers "at least two full years" of support and network access for older BBOS devices. However, it has not committed to anything beyond that point, meaning that many businesses may find themselves out in the cold come 2020.

The company finally made the decision to ditch its own-brand operating system in 2015, moving instead to Google's Android software. However, BlackBerry's fortunes were not much improved by this, and the firm announced last year that it would cease manufacturing its own phones, outsourcing these duties to Chinese company TCL.

Unfortunately, sales have continued to be poor, and BlackBerry managed to shift just 200,000 units over the course of 2017. Despite launching a number of flagship devices, including the KeyOne with its physical keyboard, response from both consumers and businesses has been lukewarm at best.

BlackBerry is anxious to push users of its older BBOS devices towards its newer Android models, and is offering a trade-in programme which promises "a significant discount and incentive to upgrade," according to the company.