A functional, no-frills phone with little to entice 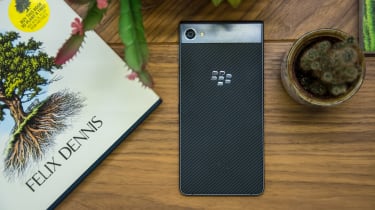 Come on, own up - who's still buying BlackBerry phones? After all, someone must be because despite a string of sub-par devices, the company is still releasing products. Its last couple of devices have been disappointing, but the company is aiming to win back some fans with its latest release, the BlackBerry Motion. Claiming a hefty battery life and (as always) top-notch security, can the Motion reverse the company's ailing fortunes?

Measuring 156mm x 75mm, this phone is decidedly on the larger side - which is accentuated by the fact that it's bordered on three sides by a wide aluminium frame as opposed to the rounded edges used by many manufacturers. The edges have a slight chamfer to them, but not enough to stop the phone feeling much thicker than its 8.1mm depth would suggest. It also feels fairly heavy, despite the fact that at 167g, it's not too far above the rest of 2017's flagship crop.

Like most of BlackBerry's products, the Motion features a soft-touch plastic back, inlaid with a textured carbon fibre-style pattern and the trademark BlackBerry logo. The soft-touch back is a feature that we actually quite like on a phone - it's grippier than glass or metal, and it's more resistant to picking up fingerprints and scratches.

Another feature it has in common with the company's other devices is that BlackBerry has gone for a starkly utilitarian design aesthetic for the Motion, rather than the snazzier looks sported by most other phones. It has more in common with the visual language of industrial machinery than with high-end flagship devices.

That's not to say that the Motion is unattractive though - its carbon fibre and brushed aluminium style has a certain appeal, and it definitely stands out from the rest of the market. On the downside, it doesn't feel nearly as comfortable in the hand as we'd like it to. A combination of its large footprint and wide aluminium frame means that it feels slightly too large and unwieldy to use - even given our comparatively large hands.

BlackBerry has kept the Motion's IPS display fairly modest, with a resolution of 1080p across its 5.5in screen and a pixel density of 403ppi. This reasonably basic screen isn't really anything to write home about; while its maximum brightness of 401cd/m2 is above average, the panel itself is on the oversaturated side.

It doesn't make a huge amount of difference to the experience of watching video clips or viewing images and photos, but the screen definitely isn't as picture-perfect as the likes of the Galaxy S8. 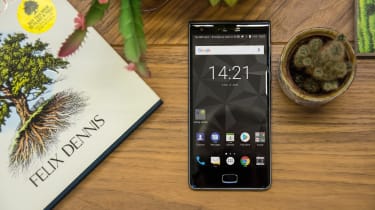 On the other hand, BlackBerry has fitted it with a 'proprietary nano-diamond anti-scratch coating', meaning that if you've got it in the same pocket as your keys, it supposedly won't get too scratched up.

The Motion is rather unimpressive when it comes to hardware and performance. BlackBerry has used a Qualcomm Snapdragon 625 processor paired with 4GB of RAM, and the Motion shares its processor with a variety of lower-end budget devices. In fact, it's got the exact same internal configuration as the Lenovo P2.

Accordingly, it racked up near-identical scores to the P2 in our benchmark tests, with a GeekBench single-core score of 821 and a multi-core score of 3558. That's not terribly impressive compared to modern flagships; the Galaxy S8 managed to score double that, as did the OnePlus 5T - which is less than 100 more expensive than the Motion.

Admittedly, we found the phone to be generally capable in day-to-day use and didn't experience many problems with stuttering or lag, but performance definitely isn't up to the standard of top-of-the-line devices.

A lower-powered processor also confers some benefits - namely a hefty battery life. After a full day of use, the BlackBerry Motion still had a very comfortable amount of battery left, and it racked up an impressive score of 18hrs 20mins in our battery tests. 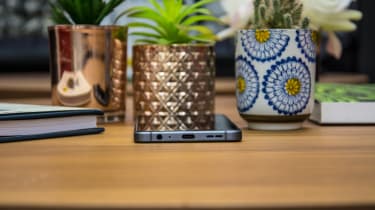 Admittedly, that's not quite as good as the chart-topping P2 (and it's still some way off the 35-hour figure claimed by BlackBerry), but it's up there with the current crop of Android flagships, and it's certainly nothing to be sniffed at.

It's set up to take advantage of Qualcomm's Quick Charge 3.0 technology should you need to juice up in a hurry, and you can also use BlackBerry's 'Boost Mode', which switches off features and limits performance for increased charging speed.

As a BlackBerry phone, the Motion includes a bunch of enhanced security features designed to keep IT managers happy. This includes all of BlackBerry's trademark security software, as well as a special, encrypted 'Locker' section protected by biometric authentication.

These biometrics come courtesy of a fingerprint reader housed in the Home button. Unfortunately, it isn't quite as accurate as some sensors we've tried. It frequently took us two or more tries before we could unlock the Motion, which is a disappointment.

Elsewhere, there's a couple of welcome additional features; IP67 waterproofing makes the cut, as does a MicroSD card slot supporting a theoretical maximum volume of 2TB. That's in addition to the 32GB storage that comes as standard. 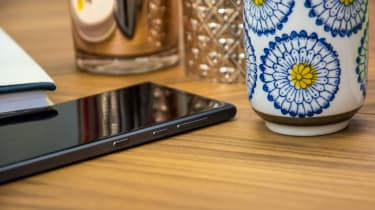 BlackBerry has also included a programmable 'convenience key' as seen on some of its other devices. This button can be mapped to any shortcut you choose, allowing you perform tasks like turning on silent mode, launching apps or start composing an email.

You can even program it with different behaviours based on where you are, such as launching navigation when you're driving, bringing up your calendar when you're at the office or opening Netflix when you're at home. This may be a timesaver for busy executives, but we're not totally convinced that it's saving that much time compared to other methods like using a digital assistant.

The BlackBerry Motion isn't impressive in any particular area; everything about it is average. It's not bad, it's just not doing anything to set itself apart from the rest of the competition, and in a market full of outstanding smartphones, it's nothing special.

BlackBerry's stock-in-trade has always been business-grade devices, but there's nothing here to entice businesses beyond the security features BlackBerry offers - and even in this regard, the iPhone has a better reputation. All of BlackBerry's productivity and collaboration tools are available on the Google Play Store too, so there's no reason to buy the Motion if you want to use those, either.

Its sole saving grace is the sub-300 price (before tax), but considering that the OnePlus 5T is less than 100 more expensive and offers double the performance along with heaps more features, you're far better off spending a bit more and getting a far, far superior device.

While it may have a wallet-friendly price and a respectable battery life on its side, there's not much else to recommend the BlackBerry Motion. It's functional, but it isn't particularly impressive.