Android vs iOS: Which mobile OS is right for you?

We look at design, security, compatibility and more to see which OS best fits your business 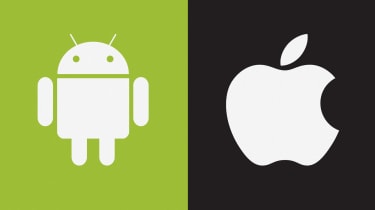 Loyalty to an operating system can some times be compared to that of a football team or a political party. Most iPhone users are Apple-til-they-die and can be keen on pointing this out at any given moment. These are the 'brand lovers' that wittingly chose vendor lock-in and have MacBook's and iPads to go with their iOS-based smartphone.

While there are many solid reasons to be an Apple-ite, the world's most popular mobile operating system is actually Android. With Google's OS, user can choose pretty much any other smartphone manufacturer (except Huawei) and arguably enjoy more interoperability with different laptop, tablet and smartphone ranges.

You may have one or the other as a consumer, but what should you do as a business? Do you kit your employees out with the best of Apple or do you sign them up to Google's Android and let them have a bit more device choice?

Unfortunately, there's a lot more to it than that. Security is arguably the most pressing concern for businesses - particularly as most will have been working remotely and look set to continue doing so. Then there are key details such as cost, compatibility, how easy it is to instal, use and learn. You may be an Apple-aficionado, but does Jeff in accounts no his way around an iPad?

These are the consideration you need to make when choosing a business-wide operating system. Just like being Liverpool or Everton, Labour or Tory, you can be Apple or Android (or neither if you find a niche OS).

Our comparison between iOS and Android will mostly focus on the software aspects of both operating systems, but a key consideration about which to choose is the availability of the hardware and whether the features packed into a smartphone is right for you.

Although iOS only comes in one flavour - the iPhone - there are lots of different types of iPhone to choose from, including the top of the range iPhone 11 Pro, the middle of the road iPhone 11. If you're not interested in the newest iPhone, you can also choose one of Apple's older models - the iPhone X, the iPhone 8, 8 Plus or even the 7 series.

The iPhone is the most popular phone in circulation around the world and that's for good reason. They're premium devices, fast, with a beautiful design and fantastic cameras in pretty much every model. But these devices come at a cost, and although Apple is always innovating, they lack real cutting-edge features and, well, feel a bit "samey" from one generation to the next.

There's so much more choice if you go down the Android road. Whether you want one of Samsung's Note series of phablets, Huawei's camera tech, Google's super-speedy options or something perhaps a little more budget like the OnePlus range, all your bases are covered.

Although the latest version of Google's OS is a far cry from the days of clunky Android KitKat, Android 10 simply can't match the slick and gorgeous experience offered by iOS. Apple's OS is simply better looking and more intuitive than anything Google can offer.

Apple's OS has an established reputation for its simplicity and ease-of-use. The learning curve for new users is astonishingly low, and its commands and functions are simple to pick up. The design is based heavily on the idea that most users don't really need all the adjustable bells and whistles that platforms have normally offered. Google's Android system, meanwhile, suffers from its reputation as being a little confusing to navigate. By contrast, this offers an insurmountable depth of customisation, but much of this is hidden deep inside menus and interfaces.

One of the main issues with designing your user interface to be overly-simplified, however, is that it normally comes at the cost of functionality. By default, iOS just doesn't give you the kind of space to adjust your user interface, or its functionality, to make it stand out in the same way you can with Android devices. Google's OS is so much more feature-rich, offering greater customisation options and an array of settings to tweak your device to fit your precise needs.

Yet within the smartphone market, usability is king. Apple's iOS is easily the best-looking operating system around, and it allows the majority of its users to do everything they would need to on a daily basis quickly and easily. Newly announced features with iOS 13, such as a gorgeous dark mode and an AI-powered upgrade to Photos, only bolster the platform's credentials.

While iOS on iPhones looks great, it has conventionally shone on tablets where the software can take advantage of powerful multitasking features supported by superb Apple processors. The laptop-style experience you can create on an iOS tablet is simply far superior to anything an Android unit can offer. Having said that, however, Apple will soon roll out a dedicated iPadOS, breaking free of the iOS mould with specially-tailored software.

The iPhone is the most popular device in the world, so it's absolutely no surprise that software makers and accessory manufacturers generally choose to prioritise it over Android. This means if you've got an Apple device, you can all but guarantee whatever app, platform, plugin or attachment you want to use will be supported.

Android, by contrast, is a bit more of a gamble. Samsung is pretty much the only major manufacturer whose devices are routinely supported as a matter of course, but even that's restricted to the flagship S-series handsets.

Another potential issue for some users will be the fact that Apple has chosen to remove the headphone jack on later devices. This isn't a major problem, given that there's a Lightning to 3.5mm jack adapter supplied in the box and Bluetooth headphones are widely available. And although some devices, such as the Samsung Galaxy S20, have ditched the headphone jack too, an Android device may be a better option if you're dead set on the 3.5mm port.

Mobile security is too often overlooked by businesses, but if you're issuing devices to your employees, you should make certain that they're as secure as humanly possible. The list of vulnerabilities, exploits and other security flaws that have been discovered in the Android OS is long and extensive, as is the list of malware-riddled apps found on the Google Play Store.

iOS benefits from a better reputation, but it's far from unhackable. Recent notable flaws including the HomeKit bug and the Meltdown/Spectre debacle. Instances of major exploits in Apple's devices are much, much fewer than on Android, however, and it benefits from faster software rollouts, too. Apple can push updates to all of its handsets directly, whereas Android users must wait until their phone maker has implemented a version of Google's update that works with its own Android skin.

It's with noting that Apple has doubled down on security for iOS 14, with privacy features a big part of its 2020 developer conference.

Android has millions of fans around the world, and with good reason; it's matured into a powerful and versatile operating system, with heaps of functionality. With time, the OS has offered a smoother user experience and a more aesthetically-designed interface too. However, for business devices, the fact is that Apple's software remains king of the hill.

iOS is slick, easy to use, good-looking and boasts absolutely stellar security and privacy features. While it's not without its flaws, the benefits far outweigh the disadvantages, and for corporate devices, iOS should still be your first port of call.