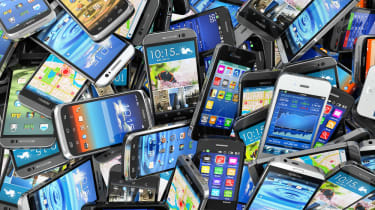 Figures from analyst house  Gartner show global smartphones sales to users totalled nearly 408 million units in the last quarter of 2017 a 5.6% decline since Q4 2016 representing the first ever year-on-year decline since these figures were first recorded in 2004.

Despite retaining its top spot as having the greatest market share among consumers, Samsung recorded its own Q4 decline of 3.6% between 2016 and 2017.

Emerging players Huawei and Xiaomi, meanwhile, were the only two to record a rise in sales in the same period, with manufacturers Xiaomi recording a staggering 79% growth in sales, followed by Huawei with the second fastest-growing sales at 7.6%.

Anshul Gupta, research director at Gartner, said: "Two main factors led to the fall in the fourth quarter of 2017. First, upgrades from feature phones to smartphones have slowed down due to a lack of quality ultra-low-cost" smartphones and end users preferring to buy quality feature phones.

Despite recording the first ever year-on-year decline in sales for Q4 2017, smartphone sales for the full year as a whole increased between 2016 and 2017 by 37.5 million to 1.5 billion units overall.

But news of Apple's decline in sales is compounded with reports the tech giant was last month forced to halve iPhone X production in light of weak sales. Samsung, meanwhile is expected to show off its latest model, the Galaxy S9, at a Mobile World Conference (MWC) launch event next week.

Xiamoi's smartphone portfolio, comprising its Mi and Redmi models, have helped accelerate its growth in the emerging Asia/Pacific (APAC) market, according to Gartner, while also helping the company win back lost market share in China.

Gupta added: "Future growth opportunities for Huawei will reside in winning market share in emerging APAC and the US. Xiaomi's biggest market outside China is India, where it will continue to see high growth. Increasing sales in Indonesia and other markets in emerging APAC will position Xiaomi as a strong global brand."