Mexico, Ecuador and Armenia all have faster 4G speeds than the UK 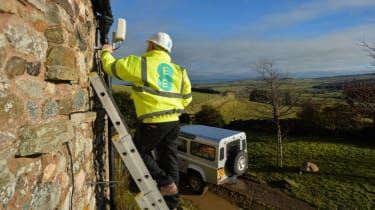 The UK's 4G speeds lag behind much of the world, with its 23.11 Mbps average comparing poorly to leader Singapore's 44.31 Mbps, according to OpenSignal.

Much of Europe beat the UK's speeds in OpenSignal's tests, with the Netherlands coming in second on the charts, with an average speed of 42.12 Mbps, Norway's 41.20 Mbps and Hungary's average speed of 39.18 Mbps.

The UK ranked 39th out of all countries in the list, beaten by Mexico, Ecuador and Armenia, which all offer mobile users faster data speeds.

Within the UK, EE was the clear 4G winner, with data speeds of up to 29 Mbps. The next in line was Three, with average download speeds of 22.6 Mbps, Vodafone in third place, reaching speeds of 20.1 Mbps, while O2 tailed behind with 15.2 Mbps.

However, even coverage by the market the leader was patchy. Although EE's 4G is available across much of the UK, Three is catching up on download speeds in the North East, Northern Ireland and Wales, while Vodafone is closing the gap in the latency category across the UK. O2 is the second-most widely available network.

OpenSignal's stats suggest 4G is now available across 80% of the UK, despite the rollout of coverage lacking momentum, in part due to the reliability and satisfactory speeds of 3G networks. London, surprisingly, was responsible for some of the lowest-measured 4G speeds in the country, with O2's network reaching speeds of just 10.2Mbps in some areas.

OpenSignal collated the information between December 2017 and February 2018. Late last year, Ofcom's figures reported 4G was available across just 43% of the UK, although OpenSignal notes that the regulator's report is based upon geographical coverage rather than user data.