We're addicted to our phones, according to Ofcom

Although always being connected means flexible working, some think it's having a negative impact on relationships 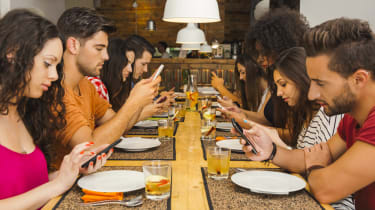 It's official: the UK population is addicted to their smartphones and with 78% of us armed with a smartphone (95% for those between 16-24), it's not surprising we struggle to switch off.

Research by Ofcom has revealed people check their smartphones every 12 minutes on average and two-fifths of the adult population check their phone for notifications within five minutes of waking up. The under-35s are the most likely to check their devices as soon as they open their eyes with 65% admitting it's the first thing they do in the day. Similarly, smartphones are checked just before going to bed. 37% of those questioned in Ofcom's survey said they always check their phone five minutes before they switch their lights off.

The landscape has shifted exponentially over the last ten years and now the majority of the UK population expect to be constantly connected to the internet, whether that's via Wi-Fi or a mobile data connection. Being permanently online has its benefits. 41% said that always being connected means they can work more flexibly, which has advantages for both employees and employers and 35% think always being online means they can use their commute more effectively, getting on with business tasks.

However, it's not all positive news. Living in an always-on world means 15% of the population feel they're always at work and more than half say always being connected is disruptive when building relationships with family and friends.

"Over the last decade, people's lives have been transformed by the rise of the smartphone, together with better access to the internet and new services," Ian Macrae, Ofcom's director of market intelligence, said.

"Whether it's working flexibly, keeping up with current affairs or shopping online, we can do more on the move than ever before. But while people appreciate their smartphone as their constant companion, some are finding themselves feeling overloaded when online, or frustrated when they're not."