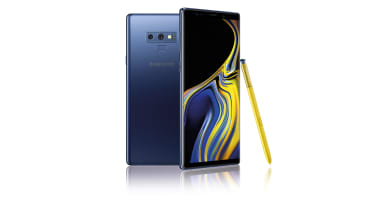 Samsung has officially revealed the ninth generation of its successful Galaxy Note phablet range at its launch event in New York.

The Note 9 has a tough act to follow given how well received the Note 8 was; the biggest question is whether it has anything to add to a phone that was already so well-made.

Historically the Note range has always bowed to the Galaxy S launch, giving the flagship smartphone plenty of time to hit the market before making an appearance later in the year.

The Note 9 will be no different, with an official release date set on 9 August, eight months after the Galaxy S9 appeared at the Mobile World Congress. The device will hit shelves on 24 August, and pre-orders are open now.

Despite its success, the Note 8 was shockingly expensive at 869. Unsurprisingly, its predecessor has followed suit, launching at a staggering RRP of 899. While that does get you more storage (more on that below), it's still a high price indeed.

As is usually the case, the images of the Note 9 which leaked prior to its official unveiling turned out to be more or less on the money. While the design isn't radically different to its predecessor, that's not hugely surprising; Samsung has hit upon a winning formula with its curved, edge-to-edge displays and glass-backed frames, so it makes sense not to deviate from it too radically.

Contrary to earlier rumours, the Note 9 does not feature an in-display fingerprint reader, opting instead for the traditional rear-mounted sensor. 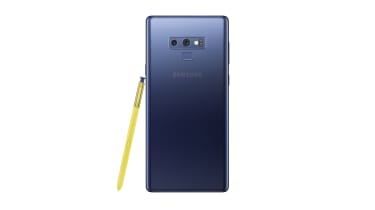 It's available in four colours - black, blue, copper and lavender - with the blue variant including a rather snazzy yellow S Pen.

The Note 9 features the biggest display ever seen on a Note device, at a whopping 6.4in. As with Samsung's previous devices, it's got a 2,960 x 1,440 QHD+ resolution and a Super AMOLED panel, which is bound to be near-flawless if history is anything to go by.

The Note series is aimed at pro-sumers and power users, and as such it's always been a bit more powerful than the regular Galaxy S range. The Note 9 looks to continue this trend, and features a new processor with a higher clock speed than its predecessor. Oddly, Samsung has neglected to specify exactly what chip it's used - only that it's a 10nm octacore chip with a max clock speed of 2.7GHz.

Storage has been seriously beefed up; the entry-level version starts with 128GB of storage, going up to 512GB for the more expensive version. That's further expandable via microSD card, meaning you can pack your phone with more than 1TB of capacity if you so choose.

Like most manufacturers, Samsung has also fitted its device with 6GB of RAM for the base 128GB configuration - although the more expensive 512GB version has an increased 8GB allocation.

The battery is also the biggest ever seen on a Note device, with a 4,000mAh capacity. There's also water cooling and advanced power management features. Samsung has evidently gotten over the excessive caution it displayed regarding battery capacity directly following the catastrophic launch of the Note 7.

Just like with previous devices, the Note 9's camera is a major focus for Samsung. It uses the same dual-aperture technology as the Galaxy S9, but it also features advanced software which can alert you to problems with photos you've just taken (such as smudges or blinking) and will optimise the colour tones based on whatever you're photographing.

Samsung has a few tricks up its sleeve compared to other manufacturers, and the S Pen and DeX are key among them. Both have had major updates; the S Pen now includes Bluetooth Low Energy support, allowing it to act as a remote control for the Note 9. You can use the S Pen to play and pause media, remotely take a picture for selfies and group shots, and you can even use it as a clicker for presentations and slide decks. Samsung will also be releasing an SDK for the S Pen later this year, allowing developers to integrate the new functionality into their apps. 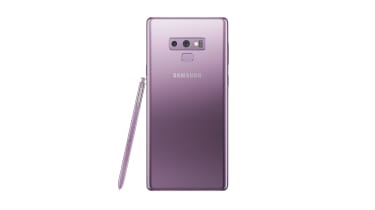 Naturally, the Note 9 is also compatible with Samsung DeX, and there's a big update here as well. Rather than having to use the Dex Station or DeX Pad to connect to a monitor, the Note 9 can now connect to a screen with just a HDMI adapter. It's currently unclear whether it's also compatible with prior DeX solutions (although we would assume it is) and it's also unclear whether you'll need a proprietary Samsung adapter or if any old USB-C to HDMI converter will work.

All the fan-favourite features have made a return, too. IP68 waterproofing, wireless charging, fast-charging and biometric authentication via fingerprint and iris scanners are all present and correct. Bixby is back too, in case you were one of the handful of people that actually found it remotely useful. It will also launch with Android 8.1