A novel idea that will appeal to anyone who misses the original, but it’s expensive and a work in progress 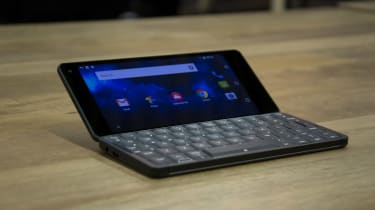 Remember the Psion Series 5? Many people of a certain generation have fond memories of the palm-top PDA, and it was ubiquitous throughout the business world during the mid-to-late 90s. PDAs were sadly sidelined by the rise of the smartphone but it turns out that, much like punk, the Psion's not dead - it's just been sleeping. A British company is now aiming to bring back the Series 5, with a full colour screen and all the advantages of Android. What could be more exciting?

First, a recap. This is essentially an Android phone with a Psion Series 5 keyboard attached. Planet Computers brilliantly sidestepped any accusations of plagiarism by hiring design agency Therefore to help create the keyboard; an agency headed by none other than Martin Riddiford, the man behind the original Psion keyboard design. The Gemini will eventually have the option to dual-boot into Debian Linux, and Android 8.1 support is promised too, but for now you're stuck with Android 7.1.

Planet Computers - which was created to develop the Gemini PDA as part of an Indiegogo campaign that saw 6,209 backers and raised over $2 million - hasn't made significant changes to Android for the Gemini, but note you will be running in landscape mode for 98% of the time.

It's also added a shortcut on the keyboard that brings up an Mac-style dock, allowing you to quickly launch any favoured apps. Word and Excel are both there on the shortcut list, for instance.

The trouble with keyboards is that if you make one mistake during the design process then they can be thoroughly annoying to type on. Others have talked about the learning curve with this first batch of Gemini PDAs, but you have to be a patient learner. It turns out we're not. 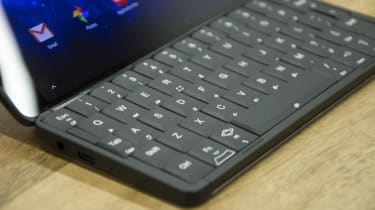 The biggest problem is the spacebar. If we had left this review exactly as we wrote it on the Gemini, it would be littered with double spaces between some words and no space at all between others. One time in ten it would register two spaces rather than one, no matter how we adjusted the Gemini's keyboard settings.

We read one review that suggested you could get round this by pressing the spacebar in the middle, but if we're typing at speed the whole point of the spacebar is that one of our thumbs can do the job. Of course you can find-and-replace afterwards (unless you're in an email client that doesn't support it), but that's still a pain.

For us, the Gemini is also a fraction too narrow. If it had been a centimetre or two wider then Planet Computers could have included a proper-sized Enter key. All too often we find ourselves hitting the apostrophe by accident. When touch typing, we also find our left thumb in an awkward position touching our right hand; this became uncomfortable after a couple of minutes. And we don't have big hands.

In as much as you can have hard data for typing speed, this again isn't on the side of the Gemini. Over the course of our week with the Gemini we kept on testing our speed, and never got over 40 words per minute. We can hit 70wpm on a full-size keyboard and, most damningly, we typically reach about 35wpm using the Android keyboard on a normal phone.

This is a huge shame. We love the theory of having a full-size keyboard on a phone, and seriously contemplated making the Gemini our next Android device when we first saw it - and let us emphasise that we think the designers have done a 90% great job: the keys have plenty of travel and, aside from that space bar, work exactly as you'd hope. But the minor design flaws translate into major real-life frustrations. Perhaps we could train ourselves out of them if we used the Gemini for a few weeks, but there's no guarantee.

There are other frustrations too, especially if you intend for this to become your main device. If you think about your daily usage of a phone, much of it is a straight interaction with a screen - and a screen designed to be used in portrait mode.

Take browsing the web. Scrolling down a page is so simple on a normal phone that your brain goes into neutral. With the Gemini, the keyboard just gets in the way. Even if you hold it in landscape mode, it feels awkward and you're constantly scrolling to read the text. 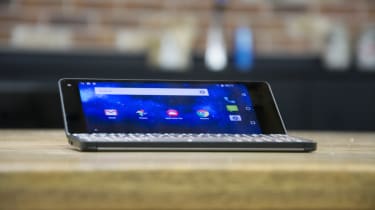 You'll quickly become tired of entering the PIN each time: there's no fingerprint reader, and you have to prod the screen rather than tap the physical keyboard. At least you can enable Google's Smart Lock so that it stays unlocked so long as it's on-body or near to a Bluetooth device that you've set up (for example, a smartwatch).

There are some signs this is a first-generation device too. The fact you can't charge using the USB-C port on the right-hand side, for example, and that this device gets rather toasty if you charge it using a 5A charger. The odd choice of a micro-SIM card when the rest of the world has moved to nano-SIMs.

Nor are we fans of the screen protector that Gemini puts on. This dulls the screen's colours and our unit had an annoying air bubble at the top right; we quickly removed it with the help of a Stanley knife.

There are some plus points to the design, and ones that point to this being a secondary email machine rather than your main phone. Let's say it's 7.30am and you want to triage your emails before work. It's perfectly possible to do this on a normal phone, but only with two hands free. You can sit the Gemini in front of you and flick through emails with one hand while eating your morning bagel with the other.

This is one time where the keyboard works well too. In a way it's better suited to hunt-and-peck typists than touch typists, so if you want to bash out a quick reply then it feels quicker than with a normal phone.

The voice assistant works well too. When closed, you can press it and a beep tells you that Google Assistant is now listening. Give it a command - such as "Call Karen Smith", where Karen is saved in your contacts list - and lo it shall happen. That's particularly handy for phone calls, because you don't want to open up the clamshell, navigate to the Phone app and find the contact you want to call. 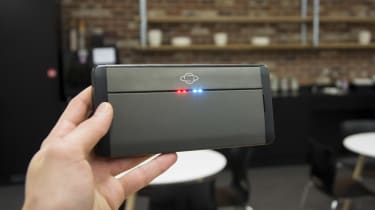 If you receive a call, there is (theoretically) a way to assign a unique pattern of flashing LEDs to show who's on the line before you accept it. It's no substitute for an external LCD, but will surely appeal to the geek audience most likely to buy the Gemini.

The screen itself is a good example of its type. Measuring 5.99in across the diagonal with a 2,160 x 1,080 resolution, colours appear vibrant at first glance. So it proved under the eye of our X-Rite calibrator too, covering 97% of the sRGB gamut with a contrast ratio of 1,077:1 a maximum brightness of 427cd/m2. Just don't expect colour accuracy, with an average Delta E of 4.58.

This isn't the world's quickest phone. Scores of 1,728 in the Geekbench single-core test and 4,888 in multicore place it next to mid-range phones such as the LG G6. That's despite the Gemini including a ten-core processor and 4GB of RAM, which goes to show that numbers aren't everything. But the same is true of benchmark figures: we were quite happy with the Gemini PDA's responsiveness during testing.

Where the PDA excels is battery life. Not so much its score in our video-rundown test, where it lasted 11hrs 6mins, but in real-world use. Planet Computers claims it can last two weeks in standby mode, so if you do sling it in a bag for emergency use then you can forget about it until you need it.

When we first saw the Gemini PDA in January, we wanted one. Now that we've played with the finished product, our ardour has cooled. That's in part due to the price, in part due to our disappointment with the keyboard, but in the main because we think it would only ever be a second device: we badly missed our phone's pick-up-and-proddability. 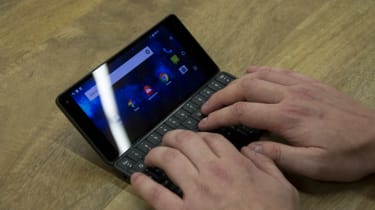 This isn't to say a niche doesn't exist for the Gemini. A full keyboard has benefits for specific tasks where predictive text simply isn't effective. With Debian support, it will be a full computer in your pocket too - that's when the USB-C connections make total sense. And we know that many existing Gemini backers are delighted with the product.

If you think you will be too, then don't be put off by the three-star rating. There's much to like about the Gemini PDA, and we only wish Planet Computers success as they continue to develop it. But for the moment, we'll tuck our 599 back into the mattress.

There's a lot to like about the Gemini PDA, but a fiddly, buggy keyboard and a high price make it more of a curio than a genuine replacement for your existing smartphone.