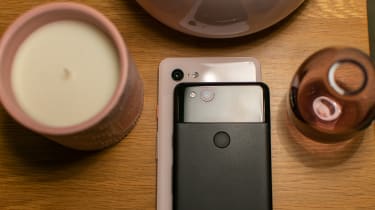 Google has officially taken the wraps off its newest hardware products at a launch event, including two new phones, a new Chromecast, a new smart screen hub and an all-new Chrome OS tablet.

The New York City event was largely dominated by the Pixel 3 and Pixel 3 XL, the latest in Google's line of flagship Android smartphones. Featuring wireless charging, an improved camera and a host of new software features, the two devices will go on sale in stores from 1 November and can be pre-ordered right now. Prices start at 739 for the Pixel 3 and 869 for the Pixel 3 XL.

Also on display was the Google Home Hub, an Echo Show-style smart hub with a 7in screen, which is aimed at tying together Google's smart home portfolio and the company's AI Google Assistant. It'll launch for 139 and is available to pre-order from today, or available in stores from 22 October.

The most interesting announcement for businesses, however will be the Google Pixel Slate. A brand new tablet device running Chrome OS, the Slate marks Google's first foray into tablets since the Pixel C back in 2015, and helps address two areas which are less well-served than smartphones or laptops: Chrome OS devices and premium tablets. With an iPad-esque smart keyboard cover, the Slate is designed to take on the Surface Pro and iPad Pro, and will be available from 549. Pre-orders start on 1 November, with full availability beginning 22 November.

While this event marks the first time that the new devices have been officially revealed by the company, fans have already had a good look at them, as the new hardware has been widely leaked. The Pixel 3 in particular has been subject to a number of embarrassing leaks, such as when one of the new phones was discovered in the back of a taxi. Google acknowledged the leaks, with EMEA hardware marketing director Yasmina Brihi joking "we're better at making hardware than we are at keeping secrets".