BlackBerry Key2 review: The best physical keyboard no one asked for

Despite the improvements, the flaws of BlackBerry’s Key range are still front and centre 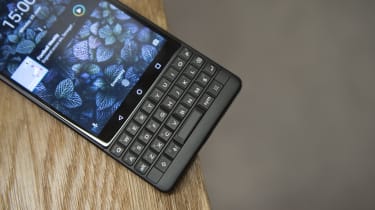 Following on from the KeyOne, BlackBerry has released the Key2, or rather, a Chinese firm called TCL Communications has. Since it stopped making hardware two years ago, this is the fourth mobile phone with the BlackBerry branding to be released by TCL and it's continued to support the famous physical keyboard that BlackBerry takes its name from.

Why isn't TCL using virtual keyboards like every other manufacturer you ask? Apparently, people are still keen on physical ones; case in point, the KeyOne, which evidently sold well enough to warrant a second model.

Looking beyond the keyboard, there has been a considerable improvement from the KeyOne, but that has resulted in a considerable hike in price too. That puts the device in amongst some very good smartphones like the LG G7 and the brilliant OnePlus 6. Can a smartphone with a physical keyboard really cut it in 2018's competitive smartphone market?

When you think of the uproar over notches on flagships like the iPhone X, it's staggering to think a manufacturer would release a smartphone with a physical keyboard that takes up such a large area of the screen. The modern smartphone has evolved to cater for streaming films and TV on the go, which means expanding screens and reducing bezels and buttons, not putting four lines of physical keys across the lower part of the screen. And that's not unusual for BlackBerry as it has released devices without a physical keyboard, like the Motion Leap and the DTEK60. But by sticking with it for the Key2, BlackBerry just further emphasises that physical keyboards are a feature it's basically defined by. 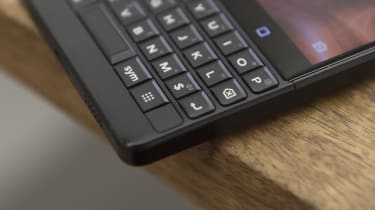 Back in 1999, the company went by the name "Research in Motion Limited" but it was allegedly given the nickname BlackBerry after making a pager with rounded keys that resembled the seeds of the little fruits of the same name. That title wasn't officially adopted until 2013 - ironically, just before the company started to struggle in the market.

Unsurprisingly, it stopped making its own hardware two years ago and the BlackBerry brand of mobiles has been run by TCL Communications ever since. The original KeyOne was designed in partnership with BlackBerry - which explains why it had a physical keyboard - but the successor was designed by TCL, making the choice to keep it somewhat perplexing.

Even more strangely, it has a new, and needless, physical key. Dubbed the 'Speed key' and housed on the bottom row, this is a shortcut to loading apps quicker, where you hold it down, press the first letter of the app in question and hey presto, you've got a faster way of loading an app. This type of shortcut works well on a laptop, like the Command key on a Mac or the Windows key on Windows, but it isn't as easy on such a small scale. It's also still slower than using a touchscreen.

It does have a touchscreen though, which is combined with the physical keys. The two together just feel strange, like switching back and forth from digital to analogue. To its credit, it is a great keyboard; the keys click nicely and it's easy to get up to a decent speed, but physical keys can only house so many buttons, unlike touch screens which have changeable pages of numbers, letters, symbols and emojis, so there's a lot of annoying Alt button pressing. More annoyingly, the Alt, along with the 'Q' and 'A' buttons above it, are on the end of the rows and can be a little awkward for your thumb.

However, rather bizarrely, the touchscreen also has a virtual keypad that pops up when using third-party apps such as Whatsapp. I admit there was a nice novelty in using different keyboards with each thumb simultaneously, but the already reduced display becomes a tiny window where not much can be seen. How this has made it through a development process begs belief, but then we are talking about a design that has both a physical keyboard and a virtual one. It's like hiring a chauffeur for a self-driving car.

The best way to describe the Key2 is that it looks like someone has taken a rolling pin to a BlackBerry Classic and flattened it into the shape of a modern smartphone. From a distance it doesn't look much different from the KeyOne, but on closer inspection, the Key2 has some nice little refinements. 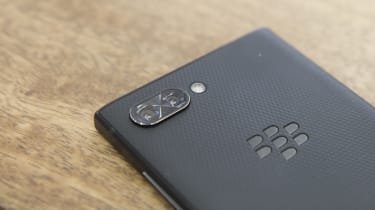 It's a device with pointy edges and an aluminium frame that is cold to the touch, which is quite different from most current flagships which sport more glass surface areas and generally have rounded edges. The rear panel features that famous BlackBerry logo and is covered in a textured plastic similar to that of a basketball.

The Key2 is 1mm thinner than the KeyOne at 8.5mm and it weighs 168g. There's a narrower top bezel (thankfully without a notch) but it's still a bezel and it robs you of that top 5% of the screen. Likewise, it has slightly thinner bezels down the sides of the screen in total contrast to almost every other flagship smartphone on the market, which have mostly gone for edge-to-edge displays.

The physical keyboard and bezels leave the screen a little cramped at 4.5in, but the 1,080 x 1,620 display isn't bad for image quality. The display is crisp and clear enough to suit all your needs, which probably won't include watching TV shows or movies because the screen is just too small for that. It's like trying to stream stuff on a smartwatch.

However its colour reproduction is quite good, reaching more than 107% of the sRGB gamut by total volume, but less can be said of the sRGB coverage, which isn't as good at 93.3%. However, there is a decent contrast ratio of 1,394:1, so overall you have a vivid, vibrant display that holds up against most mid-range smartphones on the market - but only if you ignore the fact they all have bigger screens.

BlackBerry phones have never won any medals for speed or performance, which is one reason why the price of the Key2 might make you think twice. This is actually the most powerful BlackBerry phone yet, but sadly it isn't as powerful as the other phones within its price bracket. For that 579 price tag, you get a Qualcomm Snapdragon 660, which runs at 2.2GHz, with 6GB of RAM and a choice of 64GB or 128GB of storage. It launches apps quickly and with the 6GB of RAM it switches between them smoothly. 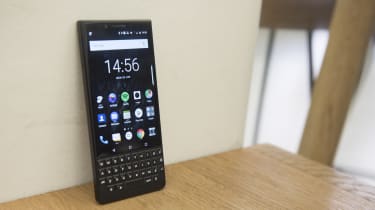 This is a perfectly paced smartphone, considerably faster and more responsive than the KeyOne, but despite that improvement, it doesn't quite translate to value for money. For comparison, other smartphones in its price range, such as the Asus Zenfore 5Z and the fantastic OnePlus 6 all performed considerably better on our GeekBench tests. The OnePlus 6 in particular blazed past the Key2 with a stronger CPU performance and vastly superior graphics, despite the fact it's more than 100 cheaper.

"Up to 2 days battery life" is proudly stated on BlackBerry's website, but from my own personal use during a working day, the battery gets you from morning to night time, but no more - and certainly not two days. Its 3,500mAh battery made it to 13hrs 6mins in our video rundown test. For comparison, The OnePlus 6 (which, again, is much cheaper) gave us a little over 17hrs. On a positive power note, it is compatible with Qualcomm's Quick Charge 3 standard, which will boost the battery up to 50% from empty in just over half an hour.

BlackBerry phones have rarely been known to house top quality cameras and taking into consideration the brilliant camera phones currently on offer, such as the Huawei P20 Pro and the Samsung Galaxy S9, you would be forgiven for thinking that a BlackBerry device wouldn't have much to shout about in this regard, but this is where the Key2 actually manages to hold its own.

It comes with a pair of 12-megapixel f/1.8 cameras, with the extra camera offering a 2x optical zoom and depth mapping for Bokeh-style portrait images. Improving on the KeyOne, the low-light performance is good too, with decent colours.

The Key2 runs Android Oreo 8.1, with a classic BlackBerry-style user interface and within it is some neat features. BlackBerry Hub is nothing new, but it's still a good service that combines all your messages from your email, SMS, Slack, Twitter, Whatsapp and so on into one easily accessible place. 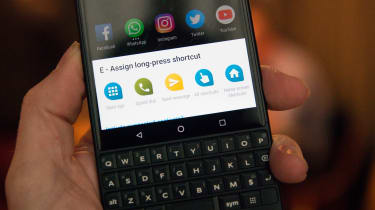 Like the KeyOne, the Key2 comes with security as a top priority. There is a privacy monitoring service called DTEK, which keeps all those pesky apps in check and lets you see how they are accessing your valuable data, with options for notifications and a meter that keeps you well informed. On top of this, there's BlackBerry Locker, which acts as safe storage for all your photos, documents and other private bits of information.

BlackBerry and TCL are trying desperately to push the brand back into the mobile phone market, but it's still keeping its biggest fault front and centre; if this was still 2008, this would be a brilliant device, but it's not. It's 2018 and we have amazing touch screen keyboards. There's simply no need for a physical keyboard any more.

While there are a lot of improvements from the KeyOne and it's got some decent features, the Key2 is still not good enough for today's smartphone market and it's wildly overpriced to boot. Unfortunately this means BlackBerry is still about as relevant to modern life as Chuck Berry - but in fairness to Chuck, his music is more likely to be appreciated on a smartphone than a physical keyboard ever will.

It’s difficult to look beyond the physical keyboard and the cropped screen, both of which are alien in today’s mobile phone market. Despite vast improvements from the KeyOne, BlackBerry is still not relevant in the world of smartphones.