Samsung Galaxy Note 9 hands-on: To buy or Note to buy?

Does the Note 9 deserve a place in your pocket? 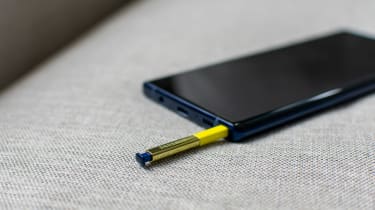 Samsung is, in many ways, in the best position it's ever been in. Its Galaxy S range has been going from strength to strength, and as Apple continues to rest on its laurels, it's looking more and more like the Korean company could be set to take the number one spot.

Onto the scene comes the Samsung Galaxy Note 9, the latest in Samsung's much-beloved series of large-screened devices. Popular with business workers, smartphone enthusiasts and power users, the Note range is generally a more powerful and higher-performance cousin to the Galaxy S family - but with the Galaxy S9 co-opting so many of the features that made the Note range popular, does it still have a place?

One of the defining characteristics of the Note series is that they're large-screen devices. Mind you, that doesn't mean all that much any more - any phone with a display smaller than about 5.5in is something of an oddity these days. Still, the Note 9 features the largest display ever seen on a Note device, at 6.4in. This is only fractionally bigger than the Note 8's 6.3in display though, and beyond being able to market it as the biggest ever display on a Galaxy phone, we're not really sure how much it adds over its predecessor.

It does, however, look the absolute business. Samsung's Super AMOLED panels are so regularly outstanding that it almost feels gauche to point it out, but the 1,440 x 2,960 screen does look absolutely gorgeous, with rich vivid colours, deep blacks and crystal-clear pictures. It's even got HDR support into the bargain. We'll know more once we can run our full suite of tests on it, but we're not expecting any less than perfection.

The good looks extend beyond the screen to the rest of the device; thanks to Samsung's edge-to-edge curved display the screen flows almost seamlessly into the body, virtually meeting the glass-backed rear shell to create a unified whole. Slightly more squared and angular than the S9, it's no less attractive, and certainly no less sophisticated in appearance. It's also available in some rather fetching colours; copper, lavender, the traditional black, and blue (which comes with a rather snazzy yellow S-Pen).

Just like the Note 8, that super-large screen hasn't made it particularly unwieldy or impractical to use, either. It still fits in the pocket (more or less) and although all but the most shovel-fisted users will almost certainly need to use two hands while texting, you shouldn't struggle with it in day-to-day use.

There are a few reasons to go for a Note device over the latest Galaxy S phone, but power isn't one of them. Rather than surpassing the performance of the preceding Galaxy in any meaningful way, the Note range generally matches it, and we're not expecting the Note 9 to change this.

In the UK, it's fitted with the same 2.8GHz octa-core Exynos 9810 as the Galaxy S9. That's 0.5GHz faster than the Note 8's processor though, so we can expect to see some notable performance increases over its predecessor - 33%, according to Samsung. That's matched with either 6GB or 8GB of RAM, depending on whether you pick up the entry-level 128GB model or the more expensive 512GB version.

That's right - the Note 9 comes with 128GB of storage as standard, and that's further expandable via microSD. Given the current limits of the microSD format, that means the Note 9 has a maximum potential capacity of more than 1TB, which is pretty damn impressive. On the other hand, given the overwhelming prevalence of cloud storage, it's arguably unnecessary. It's undoubtedly nice to have but frankly, it's overkill for most people. We would also have liked to see a 256GB tier as well 128GB to 512GB is a bit of a jump. 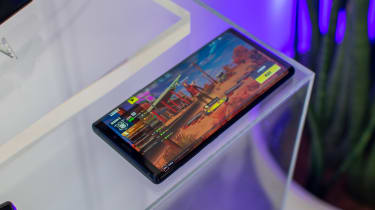 Speaking of unnecessarily high specifications, it's also worth pointing out that those power increases we mentioned earlier are most likely going to be surplus to requirements. The Note 8 was more than powerful enough to blaze through anything even demanding users wanted to do with ease, as was the Galaxy S9. In fact, the S9 was more powerful than some laptops we've tested, and the law of diminishing returns means that after a certain point, most of that power is just going to waste - although there are a few notable exceptions to this, which we'll get into shortly.

One of the upgrades that should make a very real difference to users, however, is the battery. The capacity has been increased by just over 20%, going from 3300mAh on the Note 8 to 4,000mAh on the Note 9. Samsung has evidently gotten over the hangups caused by the Note 7's unfortunate battery issues, which could mean (assuming they don't crop up again) that the Note 9 can recapture the 20-hour battery life previously enjoyed by Samsung devices.

Last year's model managed a rather disappointing score of 13hrs 38mins in our battery tests, so we're hoping that the Note 9 can significantly improve upon this - although it does have more powerful internal components to contend with. As always, wireless charging and fast-charging are also supported. 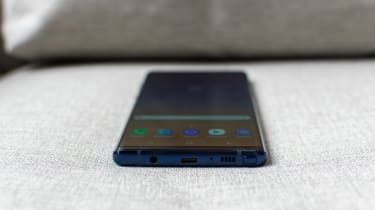 Other fan favourite features are making a return too, including biometric login via facial, fingerprint and iris-recognition, IP68 waterproofing, and of course the Note's signature (pardon the pun) S Pen. The S Pen has had a tune-up too and now uses Bluetooth Low Energy to connect to the device - meaning that it can be used to remotely control certain functions.

It can be used to play, pause and skip music and videos, for example, or to remotely activate the camera shutter for taking selfies. It can even be used to flip through a slide deck in Powerpoint, which is very cool indeed - although, again, we're not sure how useful it is. After all, you're not going to be using your phone to display a slide deck unless you're giving a presentation to a board made up entirely of mice. On the other hand, Samsung says that it's planning to release the SDK, allowing developers to add S Pen support to their own apps, so it may get more useful over time.

The S Pen is a big differentiating feature for the Note range, and it works really well - as long as you're someone that likes using a pen. If like us, you find typing out a note as fast (if not faster) than writing it out by hand, then chances are, you probably won't find yourself using it all that much aside from idly fiddling with it, or annoying colleagues with the (indescribably satisfying) ballpoint-style clicker.

The other big improvement is to DeX, Samsung's attempt to turn its phones into do-it-all computing devices. Previous Galaxy devices allowed you to connect a monitor, mouse and keyboard via a docking station to use your device with a desktop-style UI, but Samsung has done away with the docking station altogether with the Note 9.

Instead, the Note 9 connects directly to the monitor. You can plug a USB Type-C-compatible monitor directly into the phone's charging port, or Samsung also sells an HDMI adapter for screens without that option. It's also compatible with the DeX Station and Dex Pad, which launched alongside the Galaxy S8 and S9 respectively. 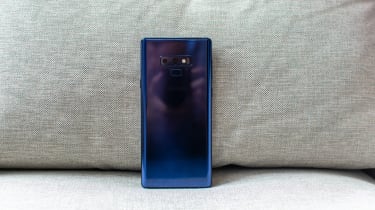 You can use the Note 9 as a touchpad, and it also supports the S Pen, effectively turning it into a mini graphics tablet. Unfortunately, though, you'll need to use a Bluetooth keyboard if you're connecting directly via USB-C, and ethernet compatibility has sadly gone the way of the dodo. Still, it's a big win for mobile workers, and it means that any businesses who want to start taking advantage of DeX can start doing so without needing to shell out for a docking station on top of an already-expensive handset.

As with previous devices, DeX works brilliantly. It's basically Samsung's equivalent of ChromeOS, and it's more than versatile enough to handle everything the average mobile worker is likely to need, and that meaty performance ensures that even serious multi-tasking is not likely to be a problem. Frankly, if we could run full-fat Photoshop on it, we'd seriously consider switching to DeX full-time.

These days, the camera is the centrepiece of any device and Samsung has made a few tweaks here, too. It's virtually identical to the S9's camera, complete with dual-lens setup, OIS on both lenses and a super-wide f/1.5 aperture. This worked to dazzling effect on the S9, so expect shots with the new Note to be just as good, if not slightly better.

There have been some software enhancements, too; the Note 9 will use machine learning to automatically analyse what you're shooting and optimise settings like the colour temperature appropriately to make sure you get the best shot. It'll also let you know if there are problems with a picture, like a mistimed blink or something in the way of the lens.

While we didn't have a huge amount of time to get acquainted with the camera, what we did see of it was incredibly promising, and we're looking forward to properly putting it through its paces once we've got a bit more time with it.

Samsung's Galaxy Note range was originally a somewhat niche line, built for power users that wanted a large screen and more productivity than was offered by the traditional smartphone. Unfortunately - or fortunately, depending on how you look at it - the rest of the market has caught up with these desires, and most modern flagships now offer large screens and productivity features galore. 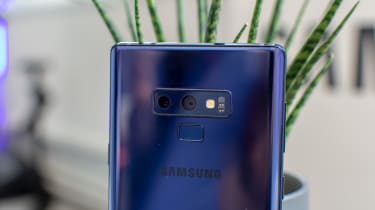 Now, the only thing stopping the Note range from basically being the Galaxy S9.5 is the S Pen. Everything else, for the most part, is something that the S9 is doing already. Having said that, it still looks like an absolutely stonking phone, and one that has an awful lot to recommend it; the S Pen is a fantastic tool if you like that sort of thing, and the improvements to DeX alone make it worth a look-in for mobile workers.