Don't buy a premium phone, buy a crap one instead

Using an older phone isn't just a smart economic move, it's a smart ecological move too 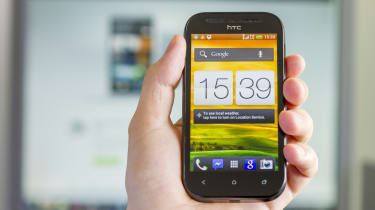 It won't have escaped your attention that a backlash against the smartphone is going on, in certain elite circles.

That picture of schoolkids riveted to their phones in front of Rembrandt's The Night Watch went viral; in The Guardian rarely a week goes by without a columnist giving up their phone for Lent; and no less a figure than Simon Cowell just confirmed doing so made him happier.

However, don't expect me to come down on either side of this weighty debate. I'm not indifferent to smartphones, but I'm far from being a power user. I work at home and still use a landline for most calls, and when out on the town or walking the green hills, I use my mobile mostly for consulting Citymapper and listening to music.

This is not Luddism: I was running the web on a PalmPilot before the word smartphone was even coined, and used a Treo for several years before Steve Jobs' bombshell burst onto the scene.

What it does mean is that I don't fret about "the notch", or squeezy edges, or how easily fingerprints will wipe off my little jewel. I use an old HTC Desire that does me just fine: all black plastic, it can be stuck in my pocket without a case, it weighs nothing, it goes two days between charges and, if dropped, it bounces. I rarely feel envy when I see someone flaunt the latest sliver of gleaming Peacock Blue sapphire glass, and was beginning to think this meant a lack of libido on my part. And then I read John Herrman...

I was browsing Medium when I came across Herrman's three-year-old article called Shitphone: A Love Story and with that title, how could I not read it?

The author a prize-winning reporter for The New York Times describes not giving up smartphones, but choosing instead the cheapest no-name Chinese knock-off he could find. His article is amusing and deadly serious at the same time. In it, he explains in clinical detail the phenomenology of living with a disgusting communication device, one that shames him in front of friends and colleagues. He unravels the psychic wounds that propel smartphone addiction: "The easy tactile pleasure of a nice phone makes you feel like you're at the centre of the internet, which is designed to respond to your desires."

But that's only the intro; he goes on to draw serious conclusions about the nature and lifecycle of the consumer electronics industry.

Branded phones are kept going by those ever-smaller improvements in usability that come with new chipsets, screens and so on, which will end up in shitphones in two years time, too. Herrman points out that shitphone had already (in 2015) been overtaken by premium shitphone, though terminology has changed a bit: we now call them "flagship" phones.

World mobile phone ownership currently stands at 7.2 billion, and it's doubtful whether any human artefact has ever achieved wider usage (knives, perhaps?). There's no question that smartphones provide an invaluable service in many parts of the world, opening up whole new vistas for trading and education. It's also true that they consume vast quantities of hard-to-source elements such as tantalum and rare-earths, and are even straining the availability of common lithium.

Barring a total collapse of civilisation, mobile phones aren't going away soon, so these problems need urgent attention. One step towards that would be to prolong the life of chips by settling for a shitphone instead of a jewel phone; more valuable still would be practical ways to recycle the contents of phones. Reusing the chips isn't feasible, and it may be that stripping and re-melting alloy cases, then grinding up the rest to extract rare metals, is the best that could be managed. In the meantime, I'll try to resist snaffling a Moto G6 for another year.