What to expect at Apple's 'Gather Round' event

Two new iPhones, a rumoured third, and a new Apple Watch are due to appear at Wednesday's showcase 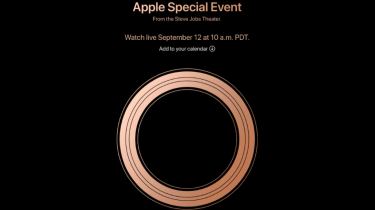 September is the month every Apple fan looks forward to. It's the time of the year when the company unveils its plans for the new iPhone and a host of other early Christmas presents.

On 12 September, new iterations of the iPhone X are expected to be showcased at the Steve Jobs theatre in Cupertino, California, along with a new Apple Watch and much more.

Apple will be live streaming the event on its website, with the show kicking off at 10 am PDT, which is 6 pm BST. In the past we've had difficulty streaming these events on anything other than Safari, but you should be able to access it on Chrome, Firefox, and, if you so wish, Edge.

What we know will appear

We know that there are going to be two new models of iPhone announced. A mid-range 5.8in device with an OLED display that will be the direct predecessor to last year's iPhone X, and a larger model with a 6.5in OLED display similar in size to the iPhone 8 Plus.

The fourth series of Apple Watch will be showcased at the event, featuring a larger display but retaining a similar size casing to previous versions, so it will still be compatible with older straps.

iOS 12, Apple's newest mobile operating system - unveiled at its WWDC earlier this year - will get its public release soon after the event (if Apple sticks to its usual patterns), offering an upgrade to the camera, an augmented reality feature, more animated emojis and a much needed shot in the arm for Siri.

We should also get a solid date on the launch of watchOS 5, also revealed at WWDC in June. Since then the software has been available in a preview state, but will likely be released generally soon after the event on Wednesday.

After the iPhone X was released, the rumours about Apple's next handset quickly followed. As we get ever closer to the 'Gather Round' event, there has been a number of 'leaks' about the next models claiming to detail their names, designs and prices. As ever, Apple has not confirmed anything, but here are the biggest rumours ahead of Wednesday's event.

Rather than releasing a brand new design, Apple is reportedly launching an 'S' range of models. This year's iPhones will look similar to 2017's iPhone X and will only have updates to its internals, like the iPhone 5s, 6s and 7s, which were all similar to the models they followed.

The mid-range model will be called the iPhone Xs and it's reported that the larger version will drop the standard 'Plus' branding and be dubbed the iPhone Xs Max. The Xs Max is set to be the largest iPhone to date, with a whopping 6.5in display.

There are also rumours that a budget version will be unveiled, called the iPhone Xc, which would be more traditional assuming it's going to be like 2013's 5c, which was a cheaper plastic model that came in a range of bright colours.

The invite for the even came in black and gold, which has led many to suggest the iPhone X will come in a gold option, while a few have claimed the cheaper model - again, like the 5c - will come in a range of colours such as blue, red and white.

Like last year's iPhone X, all three new models are set to be without home buttons and have users operate it with swiping, gestures and facial recognition. This news that isn't going down well with iPhone 8 users and most offer Apple fans that have a model with the standard home button. Much like it's decision to drop headphone jacks, making the screen larger has meant Apple has had to take away something popular and risk upsetting its core fan base.

The invite also sported a gold circle, which IT Pro believes could suggest Apple is about to showcase a redesigned Watch, which could come with either a circular frame or a circular display, and could possibly come in gold.

The launch of a new iPad Pro is very much a rumour at the moment and it's unclear whether they will be unveiled in September or October of this year. The company could be about to refresh both the 10.5in and 12.9in iPad Pros with an edge-to-edge display that support Face ID, although it would be a bold move. Edge-to-edge works brilliantly on smaller mobile devices, but you really need those thicker bezels on tablets, for structural integrity if nothing else.

The main changes could be reduced bezels for the 12.9in model, which we expect to feature the same screen size, but with an overall smaller body, and the 10.5in model is expected to become 11in as Apple stretches the screen.

Also rumoured is a new Macbook, but again, it's unclear if this will be seen at the 12 September event or saved for October. Most reports around a new Macbook suggest it will be cheaper than usual, with Bloomberg recently reporting that it will feature a Retina display with a design similar to the current MacBook Air.

The 2018 event will mark the second anniversary of the AirPod. The wireless headphones have been a popular accessory for iPhones and are due for an upgrade. There are reports that Apple is planning a new version, with Siri integration, better Bluetooth connectivity and enhanced battery life. There are rumours that Apple is planning a noise cancelling feature, but it is unclear if this is going to involve a radical design to the slim earphones.

Although it's still a rumour at this time, IT Pro would like to see better branding for the new iPhones, rather than the clunky names being suggested. iPhone Xs Max being the worst of the three.

Reportedly the iPhone Xs will be around the same price mark as last year's model at 1,000, which, while still excessive for a smartphone, would at least be sensible for a phone that isn't going to be wholly new. Apple's rumoured 'entry-level' offering in the form of the iPhone Xc, said to be a gutted iPhone X available in an arrange of colours, will also be a welcome option for those looking for an 'affordable' iPhone.

Despite being a significantly more powerful than the iPhone 8, last year's X didn't fare well up against the competition in our review, so much so that it even lost out to Samsung's S8 in many industry reviews. As such, we really need to see a set of show-stopping features with the new devices anything that makes a 1,000 phone seem worthwhile.

Apple is a company that usually follows a pattern, products showcased in September and then released to the public a week (or two) after, so we shouldn't have long to wait to get our hands on the new iPhones and the Apple Watch.

The event will start at 10 am local time (6 pm GMT) and will be streamed live on the Apple website - via a Safari browser.