A great phone, but if you’re going to spend this much you might as well get the Xs Max 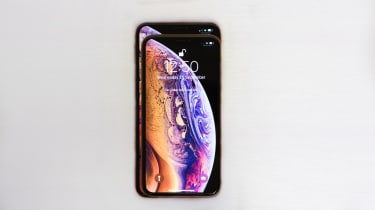 To look at, the iPhone Xs is almost identical to last year's now-retired iPhone X, but all the key changes are invisible to the naked eye. There's an improved camera, faster 4G connectivity, better battery life and quicker performance.

One thing that hasn't changed, however, is the price. The version with 64GB of storage is 999, with the cost rising to 1,149 for the 256GB model and 1,349 for the 512GB variant. That makes it more expensive than all its Android rivals, even at its base price.

It's more than 250 more expensive than the new Google Pixel 3, over 300 dearer than the Samsung Galaxy S9 and more than double the price of the incredible OnePlus 6. It's also 250 pricier than the forthcoming iPhone XR - which also happens to have a larger display, and it's 'only' 100 cheaper than the iPhone Xs Max, which has a considerably larger screen and all the same features.

That's not to say this the iPhone Xs is a bad phone. Just that there are other equally competent phones available at significantly lower cost. Still, for those who just want an iPhone, the Xs represents a decent step over the iPhone X in terms of features and performance, if not design. 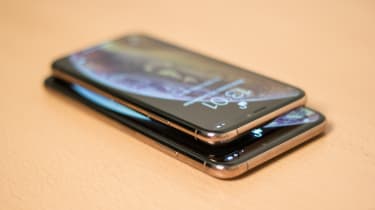 Indeed, the only physical difference between the X and the Xs is the positioning of the plastic antenna bands around the edge. On the iPhone X these were positioned on each long edge at the top and bottom of the phone; on the iPhone Xs there are an extra two bands, one on the top edge towards the right-hand side and the other on the bottom towards the left-hand side.

Most won't notice the difference but, for anyone who values symmetry, the bottom edge of the iPhone now sports a distinctly lopsided look, with three drilled holes to the left of the Lightning port and six to the right. It's also clad in a slightly tougher, more crack- and shatter-resistant glass (so Apple says), on the front and back.

Otherwise, it measures and weighs pretty much the same as the iPhone X, with the extra bonus of being a touch more water-resistant. It's still encircled with shiny, colour-matched "surgical grade" stainless steel, just in case you fancy doing a bit of open-heart surgery with it. And the screen still fills most of the front of the device, with a slim black bezel bordering it and the notch housing the phone's "True Depth" and selfie cameras eating into your screen real estate at the top.

Alas, there's no return to the fingerprint reader this year; more irritatingly, though, Apple hasn't improved the mechanics for unlocking the phone in iOS 12. You still can't simply look at the phone to unlock it straight to the homescreen; an extra upward swipe is required, which seems wholly unnecessary.

As with the iPhone X, the 5.8in display is excellent. It uses AMOLED technology, so each of the onscreen pixels has its own light source. This translates to perfect, inky black level response and essentially perfect contrast.

The screen's colour reproduction is superb, too, striking a balance between eye-popping saturation and colour accuracy. In our technical testing, it reached 96.1% coverage of the sRGB colour gamut in the browser, and it peaked at 668cd/m2 brightness (166cd/m2 up on the iPhone X). The latter is a particularly impressive number for an AMOLED screen, ensuring the screen is readable in most conditions, even really bright sunshine. 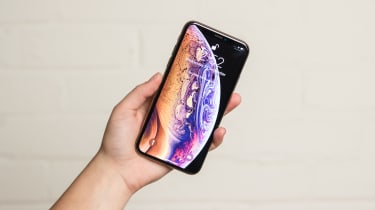 The numbers might not mean an awful lot to you, but the fact the display has full support for HDR10 and Dolby Vision standards might well do. It won't support these standards to the letter of the law, particularly when it comes to peak brightness, but we can report that videos of both types on Netflix and on YouTube look absolutely superb. Colours seem to leap from the screen, and highlights glint and gleam in an amazingly realistic fashion.

In short, the iPhone's display is absolutely brilliant. It still has Apple's excellent True Tone colour correction, which adapts the white balance of what's shown on screen to the ambient light, and Night Shift, which reduces blue light. The one irritation, though, is that Apple has moved the automatic brightness toggle switch from the main settings to the Accessibility menu. It clearly doesn't want its customers disabling this option and negatively impacting battery life.

The performance of the iPhone Xs is just as impressive as its display quality. As usual, Apple's new mobile chip, the A12 Bionic, beats all comers in the benchmarks. It's faster than last year's flagship iPhone and this year's fastest Android phones, and this applies to graphics- and CPU-intensive operation.

As usual, you won't see frame rates faster than 60fps in games because the phone's 60Hz refresh rate caps it at that rate. But the offscreen GFXBench result shows the iPhone Xs does offer a performance boost over last year's model - and more performance per pound than any other smartphone on the market.

Do you need that performance? Probably not. There's still nothing that phases the iPhone X, let alone the iPhone Xs, but it should ensure that, as Apple updates its software in the years to come, that it's more resistant to slowdown. Fingers crossed.

It's still not brilliant, lasting 12hrs 45mins in our video-rundown test. That puts it behind the Xs Max, the Samsung Galaxy S9, the Huawei P20 Pro and the OnePlus 6. But it's considerably longer-lasting than the 2017 iPhone X. The problem for Apple is that as other manufacturers catch up and start producing their own 7nm-based phones, those gaps are likely to get larger once more.

You don't choose the iPhone Xs over the Xs Max if you want better battery life, then, but at least there's no difference between the two cameras if you do opt for the cheaper iPhone.

That means, on the iPhone Xs, you get a pair of 12-megapixel cameras on the rear. One is wide-angle and the other a 2x telephoto, both optically stabilised, with phase-detect autofocus and accompanied by a quad-LED flash. The primary camera has a large sensor with 1.4um pixels and a brighter f/1.8 aperture, while the secondary camera has a smaller sensor with 1um pixels and a dimmer f/2.4 aperture.

You can shoot stabilised 4K video with the rear cameras at 60fps, and the larger sensor on the primary camera means the phone can capture greater dynamic range than the iPhone X. Not that the X was bad: before the new iPhones came along, it was the best video camera in any smartphone. But the new phones are better, capturing video footage with even more detail. 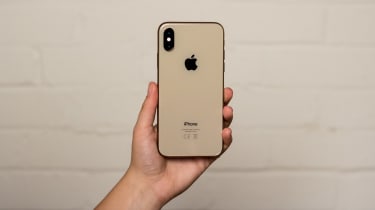 Facing the front, meanwhile, we have a 7-megapixel selfie camera with an aperture of f/2.2 and the ability to apply video stabilisation, which the iPhone X wasn't able to do. This year's front-facing camera can also record its 1080p footage at 60fps, up from 30fps.

In terms of raw quality, all the same judgements apply to the iPhone Xs as to the iPhone Xs Max. It's better, but only slightly. Photos in good light have a touch more punch to them, a little more detail and texture. It's very slightly better in low light, too.

The iPhone Xs still isn't as good as the Huawei P20 Pro for stills capture. That's mainly thanks to the P20 Pro's impressive 40-megapixel primary camera and clever triple-camera setup, which delivers almost lossless zoom at 3x and 5x magnifications.

As we've already mentioned, video capture is insanely good, but it's not just the detail, frame rate and stabilisation that's impressive. The iPhone Xs' camera also adapts more smoothly and quickly to changes in light. If you point the iPhone X at a shadowy area, then pan quickly to an area dominated by bright sky, you'll see the camera adjusting. In the Xs, that adjustment is barely noticeable.

Feeding into all this are two key changes in the processing of photos. First, the iPhone's HDR algorithm has received a boost. Now dubbed Smart HDR, this will capture eight frames instead of four at the point when you hit the shutter button. This helps the camera capture better images in tricky light - backlit portraits, for instance.

There's improved portrait photography this time around, too. Instead of the phone deciding for you how much blur to apply in the background, you can adjust it after you've taken the shot, reducing or increasing it as you see fit. As ever with this sort of photo, it's nothing like shooting with the aperture wide open on a proper DSLR but if you get everything right the results can look quite convincing.

Of course one of the other, and fairly major, new features in the iPhone Xs is iOS 12, and there's a few highlights which are worth a mention. We like the new Screen Time feature, which lets you keep on top of your smartphone use or abuse. The new Shortcuts apps is intriguing as well, adding an IFTTT-like level of automation to the iPhone, and allowing users to run macros and add shortcut icons to the desktop or shortcut phrases to Siri.

The Apple iPhone Xs, just like the Xs Max, is a fabulous smartphone. If you're firmly an iPhone fan but prefer a smaller screen, then you won't be disappointed. 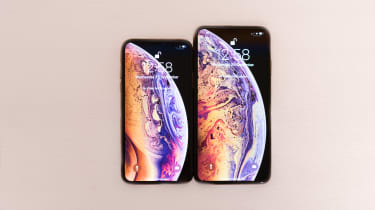 It has much better battery life than the iPhone X, a better camera with better portrait photos, HDR capabilities and video, and it's a faster performer too. If you're coming from an iPhone 7 or a 6s, it's an even greater step forward.

If we had the money, though, and were going to make the choice between this and the iPhone Xs Max, it would be the latter every time. It's expensive, yes, but not that much more expensive. If you're going to spend this much on a phone, you might as well go all out. What's 100 between friends, after all?

If you’re after a sub-6in iPhone, the iPhone Xs is what you want, with an outstanding camera, blazing performance and a truly top-notch screen. If you don’t mind a bigger footprint, however, it’s outclassed by the Xs Max - and it’s not that much more expensive.