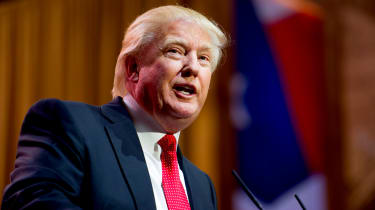 Donald Trump is considering signing an executive order that would block US companies from using telecommunication technology made by Huawei, ZTE and other providers deemed to be a risk to national security.

The news follows a number of efforts from the US to curb the influence of foreign governments, the fear being that technology companies could be exploited to spy on American citizens.

Sources close to the matter told Reuters that the order, which has been under consideration for the past eight months and could be passed as early as January, would instruct the Department of Commerce to bar the purchase of equipment from foreign providers if they suspect ties to a state government.

Although the order would be unlikely to mention any company outright, it's widely believed that China's Huawei and ZTE, both of which are under suspicion, would be targeted first. This follows an order signed last August that blocked the use of Huawei and ZTE equipment in all government departments.

For the last year, Huawei had been attempting to convince US authorities that its products aren't a threat to national security, despite hostile relationships between the US and China affecting commerce.

To try and appease the US government and show its commitment to supplying networks with its low-cost devices, Huawei joined the Rural Wireless Association (RAW).

The group represents those smaller networks in the US (those that have less than 100,000 subscribers) which are opting to sell lower-cost smartphones supplied by foreign providers, and would, therefore, be significantly hamstrung by such an order. It's believed around 25% of its members are using Huawei and ZTE equipment, something that could cost around $800 million to remove, according to Reuters.

Huawei has also argued that by banning its devices from being sold by networks in the US, it could also stunt 5G development, allowing other countries to take the lead. This would come as a big blow to the US Federal Communications Commission (FCC), which is hoping to speed up 5G rollout.

It also means that the cost of smartphones in the US could rise as a result, which could harm the country's economy.

The sale of Chinese-manufactured tech equipment has been banned elsewhere in the world, notably in Australia and the Czech Republic. The US has also been attempting to convince its allies to follow suit in limiting their use of Chinese technology, according to reports, and the UK has similarly warned that Huawei's technology could pose a national security risk, prompting BT to replace the Huawei tech that is currently used as part of its 4G infrastructure.

Moscow-based cybersecurity firm Kaspersky recently came under fire after it was alleged the company was closely tied to the Russian government and that its highly popular software could be used to exploit state infrastructure in other countries. The US has since banned the use of Kaspersky products in government departments, although the company has maintained its innocence.