A Raspberry Pi computer gets squeezed inside a mouse 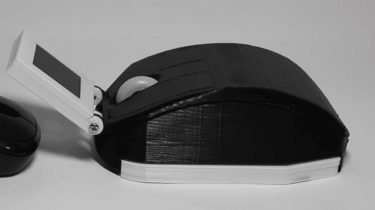 A YouTuber has built a fully functional computer inside a mouse using a Raspberry Pi Zero.

"I thought 'what if you try and put a Raspberry Pi inside a computer mouse instead?' and then I thought, 'what if you add a screen and a keyboard to make it basically an entire laptop from a mouse?'," he said.

The result is a rather diminutive laptop entirely housed in a standard computer mouse, complete with a folding screen and a pullout keyboard. The mouse is a little bigger than normal, due to the special requirements of the project and Electronics Grenade used a 3D printer to design and develop his own mouse.

"This is a completely functional computer inside a totally 100% completely normal sized mouse. Basically, I designed a mouse in fusion360 and printed it out and added a Raspberry Pi Zero, a 1.5in screen, a battery and a keyboard," explained the YouTuber.

"My original plan was to put all the components into an ordinary sized mouse, but as you probably figured out, it didn't quite work out. This device features an epic folding screen, a pullout keyboard, and all the buttons you find on an ordinary mouse, including a scrolly."

As expected with using the Rasberry Pi Zero, the device presented issues with typing and is not very powerful. When trying to run things like Minecraft Pi edition, the Pi Zero often froze, according to Electronics Grenade, but most other applications ran as expected.

"Typing on the tiny keyboard isn't actually as bad as it might seem, but it is kind of tricky considering the keys are so small and crammed together. And you have to have your hand in a very uncomfortable position," he explained.