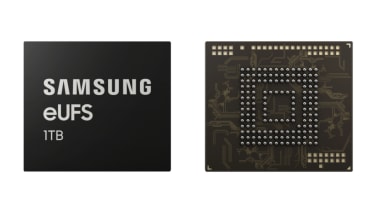 Samsung has revealed that it's mass producing 1TB flash storage chips - the first of their kind to become available for manufacturers to integrate into smartphones.

The embedded Universal Flash Storage (eUFS) 2.1 chips have been designed to power "next-generation" mobile phones, with the added advantage of a whopping 1TB storage. This means devices using these storage chips will have comparable to PCs and laptops, and users won't need to keep swapping memory cards if they store a lot of photos, videos or files, run intensive apps or any other content.

"The 1TB eUFS is expected to play a critical role in bringing a more notebook-like user experience to the next generation of mobile devices," said Cheol Choi, executive vice president of memory sales and marketing at Samsung Electronics.

"What's more, Samsung is committed to assuring the most reliable supply chain and adequate production quantities to support the timely launches of upcoming flagship smartphones in accelerating growth of the global mobile market."

Samsung already has 512GB and 128GB versions of the eUFS chip. In fact, it only launched the 128GB version four years ago and has steadily increased capacity over the years, marking pretty swift growth.

As a comparison, high-performance smartphones with a 64GB eUFS (the Samsung Galaxy S9 and S9+ for example), can store 13 10-minute 4K UHD before exhausting its capacity. The 1TB chip can store 260 10-minute videos at the same quality.

It also operates at speeds of up to 1,000 MBps, which is twice as fast as a 2.5-inch SATA solid state drive (SSD), 10 times as fast as a standard microSD card and 38% faster than its previous 512GB flash storage.

Rumours suggest that Samsung's 1TB eUFS will appear in the top-of-the-range Samsung Galaxy S10, alongside a lower-specced iteration.