The Galaxy Fold has six cameras and dual batteries, but costs nearly $2,000 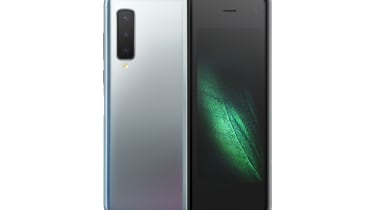 Samsung finally unveiled its much talked about Galaxy Fold yesterday.

The foldable smartphone, which was unveiled during the launch of the latest models from its Galaxy series, will be available from 26 April in the US and 3 May in Europe and will cost a whopping $1,980 (1,517).

The device has taken nearly a decade to develop and will be a 4G version initially, with a 5G variation available in the near future, according to Samsung. Presenting the phone in the US, Samsung's senior vice president for mobile, Justin Denison said: "The Galaxy Fold is a device unlike any that has come before it".

The company had showcased a prototype in November, shortly after the largely unknown Royole company unveiled its own folding device, but this Galaxy Fold looked a lot more sophisticated than both of those.

To start with, it isn't just a screen that folds round into one all display smartphone, but rather it's more like an older Galaxy model when closed, with a 4.6in display. However, when opened up it showcases a massive 7.3in Infinity Flex Display, which transforms the phone into a tablet. 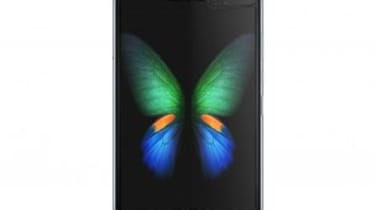 One of the biggest challenges Samsung faced was building the backbone of the device. Unlike the Royole Flexpai, where it looked like a bent screen, Samsung has developed a hinge, something that could hold strong as it is folded and unfolded hundreds of thousands of times. This hinge system looks very intricate and sophisticated, with multiple interlocking gears hidden underneath the display.

The device will come in four colours; Cosmos Black, Space Silver, Martian Green and Astro Blue and customers will be able to customise the hinge with one of the four colour options.

When closed, a 4.6-inch HD+ (12:9) display will be used for 'phone mode' where users can send text and make calls with one hand while on the go. This will then open up to a 7.3in main display, which is an Infinity Flex Display. 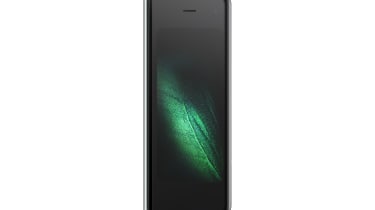 Each screen works perfectly on its own, allowing for three apps to work at the same time. You can search, chat and stream all at once. But the Fold is also a unified device where the displays work together, to give a singular, seamless, multiscreen experience. The key to making this possible is a new technology called 'app continuity' which has been developed with the help of Google's Android and services like YouTube. This means is you can quickly and easily switch between the screens without missing anything. So, whatever is on the front display, can be seen on the bigger screen instantly when you unfold the phone. Many will have noticed the slight lag on the Royole Flexpai, when switching screens, but it seems Samsung has found the answer to this.

Inside the Fold there's a state of the art 7nm processor with 12GB of RAM, making it potentially one of the most powerful smartphones on the market. There's also 512GB of onboard memory and for the first time on mobile device support for universal flash storage 3.0. This means you'll be able to read data twice as fast as most other smartphones, which should make the device it incredibly responsive.

We are seeing more and more cameras added to smartphones, the S10+ has five, so it's no surprise that the Fold has a system of six cameras; three on the back, two on the inside and one on the front. All of the cameras will have AI running in the background. 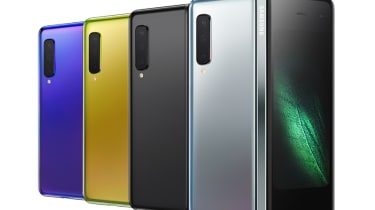 The device has two batteries and Samsung engineers developed special technologies to combine energy from both batteries into a single power source.