The Galaxy S105G is set for release "early in the summer" 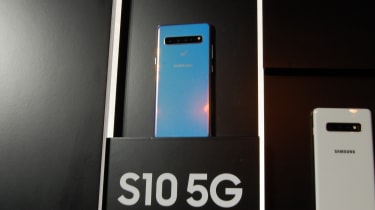 Samsung has confirmed plans to launch a 5G-enabled version of its Galaxy smartphone range early in the summer.

While most of the talk from yesterday's launch will be focused on the company's foldable phone (Galaxy Fold) Samsung also unveiled a 5G enabled device - the S105G.

The Galaxy S105G will be one of Samsung's biggest ever devices and the first phone to be 5G ready. A number of manufacturers are likely to follow suit with announcements of 5G handsets at the forthcoming Mobile World Conference (MWC) event in Barcelona, but it's the Korean giant that's got there first.

"With 5G right around the corner, we need to make sure that our consumers are ready for this type of connectivity," said a spokesperson. "And that is why it is my pleasure to introduce to you today, our Galaxy s10 5G device.

"This will come to the UK early in the summer and will support a 6.7in display, which will be the largest on our S10 devices. We will also add a 3D depth camera to the back for augmented reality purposes and support a 4,500 mAh battery, it's a powerful device so we know our consumers will want a powerful battery as well."

The company really means it too, as this will indeed be the largest Galaxy phone (excluding the Galaxy Fold) it's ever released. It is significantly larger than the S10+ and measures 162.6 x 77.1 x 7.94mm, which is even bigger than the recently released Note 9. This will also see the Infinity Display expanded to 6.7in for the new device.

However, perhaps the most interesting part of the specifications is that of the 8nm chip - the same as the other S10 models launched - which hasn't been specified. As is common knowledge, Samsung uses its own Exynos chips in Europe and Snapdragon ones in the US, so it's a safe bet to say this trend will continue.

However, for the gambler, there is a plausible theory that the Galaxy S10 5G will dodge Qualcomm's Snapdragon and its 5G ready X50 model in favour of its own technology. The "8nm octa-core chip" could be a reference for pairing Samsung's Exynos 9820 chip with Samsung's Exynos Modem 5100. But we won't know anything until the company announces it, although the Galaxy Fold came with a 7nm processor.

Likewise, it's a 5G-ready smartphone, but how ready is 5G itself? There is a potential scenario that the S105G might not get to benefit from the next generation of mobile connectivity before a newer version of Galaxy smartphone is released.