Bendy screens are about to take flight

As the industry attempts to revolution smartphone design, it's worth keeping the bigger picture in mind 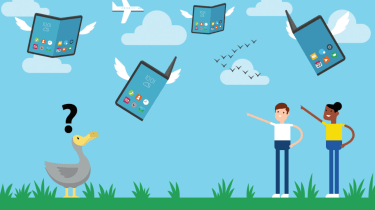 About 20 years ago, I hit the nadir of my career in tech journalism. Egged on by my editor at the Sunday Times, I wrote a column lobbing bricks at these so-called smartphones that had just arrived on the market.

There's nothing smart about these hulking great lumps of glass and plastic, I wrote. They're terrible phones, terrible cameras, terrible at everything. They are - I confidently predicted - as dead as a dodo.

We even illustrated it with a drawing of a dodo carrying a smartphone, lest anyone not grasp the subtle point I was making.

Twentysomething me, of course, made a rookie error. I wrote off an entire genre of technology based on the first devices available on the market. What I didn't appreciate at the time is the first few samples of any new type of product are, almost without exception, woeful. The first laptop came in a suitcase, the first digital cameras took photos that were so low-res you couldn't print them at stamp size and the first tablet weighed a ton and ran out of battery in 25 minutes. But most things get better, given time.

It's in this acquired spirit of patience that I urge you to keep an eye on Royole's bendable screens. They turned up at CES in Las Vegas earlier in the year, in the form of a folding (you guessed it) smartphone.

Royole was pretty protective of its FlexPai phone, only letting you play with it with one of the company's PR handlers looming over your shoulder - and you can see why they might be concerned. The device is clunky, the Android software reacts erratically when shifting from phone to folded-flat tablet mode and there were worrying signs of wear and tear on those presumably days-old devices.

But consider the bigger picture. The screens are stupidly thin, about as thick as those screen protectors you get for current phones. If you blow on them, they wobble. That means they are an order of magnitude lighter than current glass screens.

That's why Airbus is one of the companies working in partnership with Royole, looking to see if it can introduce these screens across its aircraft. Imagine being able to replace all those heavy 9in screens they fit in the back of aircraft seats with a featherweight 20in display that the passenger can roll out when they want to watch a movie and stow away again when they want to get some shut-eye. Not only is the passenger experience massively improved, but it means Airbus slashes the weight of its aircraft. And every ounce you shift from the weight of a plane reduces the airline's biggest expense: fuel.

It's not only aircraft that might benefit from bendy screens. The CES showfloor was virtually a self-driving car parking lot, with every major manufacturer showing off their concept cars, all of which had massive dashboard displays and various other screens to keep passengers entertained. Because, let's face it, if you're not required to drive the damned things anymore, you're going to need something to keep you amused on the way to work.

The bendy smartphone is a red herring - a 1,000 concept device that you'd be mad to use as your day-to-day smartphone. But don't make my mistake and write off the entire genre, because bendy screens are going to be very big indeed.