The latest smartphone craze is inches away from genius 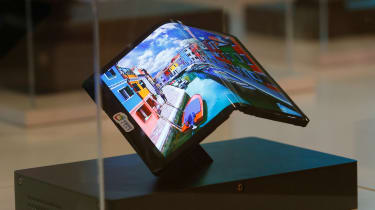 This year's MWC finally saw the arrival of a long-rumoured trend - foldable smartphones. For years, analysts and commentators have been predicting that manufacturers are working on devices with bendy screens, which allow user to fold them in half for added flexibility (in every sense of the word) - and they've now officially materialised.

The logic behind these devices, for the uninitiated, is that you can use them just as you would a normal smartphone while it's folded up, and then when you want a bit more screen space to work with, you can open it out to give yourself a bit more room.

While Chinese company Royole was first out of the gate with the FlexPai, first unveiled at CES in January, it was Samsung and Huawei who eventually stole the show with the Galaxy Fold and the Mate X respectively. Both devices have captured the tech world's attention, and the foldable phone fad looks set to dominate 2019 - but there's a problem with so-called 'foldy phones'.

In fact, there are numerous problems. Firstly, they're absurdly expensive, with price tags of around $2,000 and upwards. There's also scepticism about how long the hinge mechanisms will hold out when subjected to extended use, and they've faced criticism for being overly bulky with a poor screen-to-body ratio. Some have even dismissed the core concept as a pointless fad.

That's not my biggest gripe, though - my main issue is the fact that it's a phone in the first place.

As a form-factor, the smartphone has been basically perfected. It's a thin, flat slab of glass and metal, measuring between 5.5in and 6.5in, depending on how large your hand is. It's the perfect size for all-purpose, on-the-go tasks - big enough to fit a decent amount of content on the screen, but still small enough to use one-handed. Other designs have been tried and while they may have their fans, they haven't been successful enough to achieve dominance. Foldable phones are the solution to a problem that doesn't exist.

Tablets, on the other hand, are far from perfect. The market has been slumping for years, and a large part of this can be put down to the fact that it's a bit of an awkward form factor - an 8in tablet isn't much more useful than the average smartphone, and anything larger is a bit awkward and cumbersome to carry around with you. If people do have a tablet, it's mostly kept at home for watching Netflix on.

Foldable tablets would be a game-changer. A device the size of the iPad Mini which expands to the size of an iPad Pro would be seriously useful - you could read your book during the morning commute, and then fold it out to do stylus-based design work or proof documents, for example. The folding function would make it more portable, too, which means no more cramming a beefy 11in slate into a small rucksack.

On top of that, a larger form factor would require less miniaturisation at the design and manufacturing level, resulting in cheaper and more reliable components, bring the device's cost down and its lifespan up. There are so many advantages a foldable tablet has over a phone that I'm baffled no manufacturers are talking about it.

Phones are fine as they are. Honestly. Instead of building a $2,000 foldy phone that no-one asked for, give us a foldable tablet with some actual useful applications. I promise, people like me won't be able to give you their money fast enough.