Galaxy Fold launched "before it was ready" CEO admits 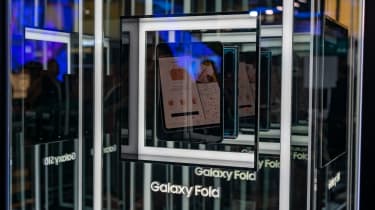 Samsung's Galaxy Fold was supposed to be the future of smartphones when it was launched back in February, but five months have gone by and that future has yet to unfold. Now, the co-CEO of the Korean giant, DJ Koh, has admitted he pushed the Galaxy Fold to market "before it was ready", according to The Independent.

The Galaxy Fold would have been the first major release of a foldable smartphone and was supposed to come out in late April. But a number of problems were reported with review units, where either internal debris or user errors could damage the screen.

Samsung reacted swiftly and delayed the launch of the device, just days before release, while it investigated. A second release date was set for June, but that was also missed as the company hadn't managed to fix the issue.

At a recent media meeting in Seoul, South Korea, Koh was asked about the launch date, to which he said: "In due course."

The CEO asked for a bit more time and admitted the repeated delays were "embarrassing" and that he had "pushed it through before it was ready".

"I do admit I missed something on the foldable phone, but we are in the process of recovery," Koh said. "At the moment, more than 2,000 devices are being tested right now in all aspects. We defined all the issues. Some issues we didn't even think about, but thanks to our reviewers, mass volume testing is ongoing."

In April, a number of reviewers had unwittingly peeled off a protective layer from the Fold's screen, but there was also reports of minor bumps and or major screen faults in Fold that were due to internal debris. The Verge's Dieter Bohn reported a bulge under the screen on his unit.

"SUPER YIKES: something happened to my Galaxy Fold screen and caused a bulge. I don't know how it happened, and I'm waiting to hear back from Samsung. It's broken," he tweeted.

From there, the company revealed the results for an initial inspection and seemed to suggest a fault with the hinge.

"Initial findings from the inspection of reported issues on the display showed that they could be associated with impact on the top and bottom exposed areas of the hinge. There was also an instance where substances found inside the device affected the display performance," Samsung said.

Although the company is working on a fix, the spectre of the Note 7 and it's exploding batteries still haunt Samsung. In 2017, when users began reporting issues with the Note 7, the company had to recall all the devices and it went down as a big loss for the smartphone giant.