What can small businesses gain from 5G?

There are many benefits on the table, but it can be hard to see them through all the hype... 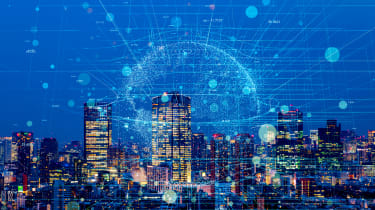 It has been heralded as a game-changer for the future of communication bringing speeds 10x faster than 4G and the ability to give life to everything from connected cars to smarter cities.

But what benefits and challenges will SMBs face, when - and if - they begin to prepare to adopt 5G?

For Jon Fell, partner and head of telecommunications practice at Osborne Clarke, there is still far too much hype around the technology for businesses to get a clear idea of its benefits.

"Most seems to be about how quickly you will be able to download data. 5G is much more than that," says Fell. "It is about greater capacity to carry data and low latency allowing near instantaneous communication and reliability."

This view appears to echo the results of an Accenture survey of IT and business decision makers across 12 industry sectors in 10 countries.

It found 53% of those questioned believed there were "very few" things 5G will enable them to do that they cannot already do with 4G networks. It also discovered 72% of executives admitted needing help imagining 5G's future possibilities and use cases, citing up-front investment, security and employee buy-in as potential issues.

"This new technology requires new infrastructure and a lot of it," says Fell. "None of which has been built yet. It will take time to roll out 5G. For the foreseeable future, 4G will continue to be just as important, if not more so."

In a bid to push for the most up-to-date tech, the UK Government has made 5G a key plank of its new modern Industrial Strategy and promised 200million for a programme of 5G trials.

In a recent speech Culture Secretary Jeremy Wright MP said: "We want the UK to be a world leader in 5G, a new age of wireless connectivity that will open up important new areas of growth for our economy."

But given 4G coverage is still patchy in places six years after it initially rolled out, can SMBs bank on the Government plans and network promises?

Paul Fawcett, mobility product manager at communications company Maintel, argues that regardless of what is promised, we still have a while to wait.

"While there's a race to be the first to rollout a 5G network, widespread adoption simply isn't going to happen this year," says Fawcett. "The business impact of this technology will be huge. But for now 5G really is just a buzzword."

Businesses are not just facing a long wait - the technical limitations of 5G, many of which are rarely advertised in promotion material, could render it ineffective for some use cases. For example, 5G signals typically unable to transfer as far as 4G, and suffer from greater degradation when passed through walls, which may result in a need for a greater number of smaller transmitters to compensate.

"Any business considering 5G in their plans for the future needs to look carefully and critically at what might actually be delivered rather than what might be claimed," explains Michael Watson, partner at Shulmans LLP.

SMB growth and the IoT

Despite this, many believe the long-term potential of 5G for SMBs should not be underestimated, despite how poorly they are being communicated.

The 5G RuralFirst campaign says it could bring coverage and faster speeds to more outlying areas of the UK currently unserved by 4G or fixed-line broadband, thus opening up new markets and customers.

The group's website says this would "evolve more efficient business models for nation-critical industries such as agriculture, tourism, renewable energy and manufacturing that operate in rural environments".

5G's lower latency will also allow data to be collected and transferred faster, bringing real-time communication within large and wide networks of sensors.

The hope is that this will drive growth for the internet of things, for example, giving futuristic applications in healthcare monitoring and enabling connected manufacturing across industries as diverse as transport and logistics or retail and utilities.

"By making digital transformation accessible to smaller businesses, the efficiency and competitive gains will be substantial."

Recent research by Gartner found two-thirds of organisations are gearing up to deploy 5G by 2020, with its main use being for IoT communications and video. However, analysts also suggest that most communication service providers will only achieve a complete end-to-end 5G infrastructure on their public networks at some point between 2025 and 2030, and that market claims about 5G in its current state should be taken with a grain of salt.

Sylvain Fabre, one of its senior research directors, said SMBs could think about using private networks for enterprises as one alternative. "This will be the most direct option for businesses that want to benefit from 5G capabilities early on," he told us.

What's certainly clear, however, is that given the speeds and lower latency afforded by 5G, SMBs should start to see some benefits early on, including the ability scale up operations on the fly. Kevin Hasley, head of product at RootMetrics, which monitors mobile network performance information, suggests this will be "vital to a company looking to scale up fast".

He added: "If an SME has a workforce out in the field on a daily basis, 5G will enable employees to communicate with each other in real-time, cutting down on lost time and productivity."

Wes Azad, Director at Innopsis, the industry association for suppliers of digital infrastructure and services to the UK public sector, said 5G will benefit connectivity to remote or mobile employees but added that it "will complement it to deliver ubiquitous high speed and high quality connectivity to both fixed and mobile end points", although he made it clear that fibre would still have its place.

Marketing hype aside, it's still not clear when we will start to see broad 5G adoption, but what is certain is that SMBs still have a great deal of work to do in order to grasp opportunities when the tech does show its face.

"The potential of the 5G network is indisputable," says Iain Shearman, MD of KCOM. "The challenge for many will be transitioning from traditional legacy systems, cultures and ways of working to enable them to make the most of the smart, new, connected world ahead."