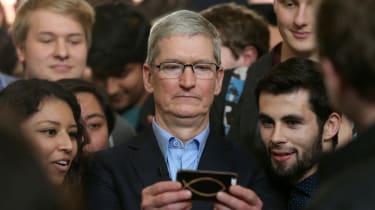 Apple has introduced a new sign in feature for mobile that will give users the ability to maintain their privacy when using iOS apps.

Dubbed Sign In with Apple, the new feature in iOS 13 takes direct aim at the ubiquitous Facebook and Google login options. Speaking during the opening keynote of Apple's annual WWDC conference, Apple's head of software engineering, Craig Federighi, described these as "convenient", but added that they "can come at the cost of your privacy".

"Your personal information sometimes gets shared behind the scenes and these logins can be used to track you," he said.

Sign In with Apple, by contrast, allows people to log into apps by pressing a dedicated button and authenticating via Face ID, meaning users don't hand over any more information than Apple already holds on them.

For apps that require name email credentials to log in rather than a Facebook or Google button, Sign In with Apple can auto-generate a random "relay" email address that hides the user's real email address should they wish.

The company, which has always prided itself on the high-levels of privacy it offers, will require app developers to build Sign In with Apple into their apps. It won't be compulsory for users, however, with Facebook, Google and email sign in options still being permitted to run alongside.

Sign In with Apple will be available as part of iOS 13 (but not, it seems, the new iPadOS), which is open as a developer beta now with a public beta coming in July. The full finished OS is scheduled to arrive sometime this autumn.