What is the 5G health scare?

The tech brings faster speeds and plenty of inexplicable controversies, with links to conspiracy thinking and a rise in violence 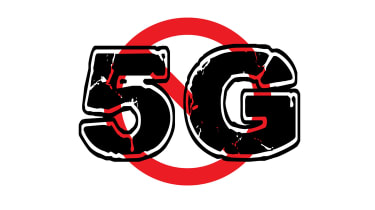 From the giant "bricks" of the 1980s to the more slimmed down and sophisticated smartphones we have now, mobile telephony has always generated health scares, and 5G is no different.

The focus of these concerns has always been the same electromagnetic waves that devices generate and receive in order to facilitate calls, SMS text messages and, latterly, connect to the internet. Over time, however, the finger of blame has pointed at different parts of the system. Whereas it was once the handsets themselves that were accused of being the source of various ailments most commonly cancer now it's the radio waves themselves that are thought to be the villain of the piece.

The emergence of 5G over the past few years, with devices capable of using this technology now hitting the shelves, has led to a resurgence of worries.

Does 5G cause or spread coronavirus?

It's an unfortunate coincidence that China, one of the biggest suppliers of 5G hardware, is regarded as the source of the coronavirus outbreak – but this 'coincidence' is the only link between the two. Despite this, a number of conspiracy theories have spread online, and are even being endorsed by a handful of celebrities and TV personalities.

Over the Easter weekend, the UK's mobile networks reported more than 20 cases of telecoms masts being damaged in suspected arson attacks. One attack was on a mast that provides mobile connectivity to Birmingham's Nightingale Hospital. There were also previous reports of an attack in the city on a mast that was merely 4G.

There have also been attacks in Liverpool, where the City's mayor, Joe Anderson, has also received threats over its deployment of 5G.

"Theories being spread about 5G are baseless and are not grounded in credible scientific theory," a Mobile UK spokesperson said. "Mobile operators are dedicated to keeping the UK connected, and careless talk could cause untold damage.

"Continuing attacks on mobile infrastructure risk lives and, at this challenging time, the UK's critical sectors must be able to focus all their efforts on fighting this pandemic."

Independent fact-checking service FullFact.com has traced the conspiracies to two flawed theories online. One incorrectly suggests 5G suppresses the immune system, the other claims the virus is somehow using radio waves to communicate and pick up victims.

Despite this, the spread of conspiracy theories has been unwittingly aided by a few celebrities. Regulator Ofcom said it was reviewing comments made by This Morning presenter Eamonn Holmes in which he said people wanted answers about the issue. Holmes issued an apology on the following day's program, suggesting that viewers "misinterpreted" his comments.

With false links between 5G and coronavirus become more prevalent, scientists have examined why some people are more likely to buy into these ideas than others.

Psychologists with Northumbria University have offered the first scientific evidence for links between violent and paranoid behaviour and a spate of violence against 5G networking infrastructure.

There have, in recent, months, been a wide occurrence of arson attacks and cases of criminal damage to masts, cabling and other equipment in countries across the world. These were previously believed to be tied with the prevalence of COVID-linked conspiracy thinking, although scientific evidence has now proven this to be the case.

Assessing 601 UK participants, researchers found that people who demonstrate temporary, short-lasting outbursts of anger and paranoia are more likely to commit vandalism and arson in this manner. The study found that belief in 5G COVID-19 conspiracy thinking was correlated with this short-term anger, and that it was thus also tied with a greater justification of violence in response to the alleged ties between 5G mobile technology and COVID-19.

The ’ research also suggested these patterns aren't to 5G conspiracies, with general conspiracy theorising linked to justifying and engaging in violent behaviour more generally. The link, moreover, between conspiratorial-induced anger was most strongly tied with justifying violence in those who were the most paranoid.

Is 5G more dangerous than 4G?

Both 4G and 5G use waves that sit in the "radio wave" segment of the electromagnetic spectrum. This is the same class of waves as those used not only in other iterations of mobile phone technology and things like WiFi, but also broadcast radio and television, as well as the handheld two-way radios used by emergency services.

The primary difference between 4G and 5G lies in the frequency of the waves used by the networks. 5G uses higher frequency waves than 4G, which provides better network capacity and speeds, but comes at the cost of range.

Because the range is shorter, more radios (or base stations) will have to be installed to maintain the widespread coverage the British public has come to expect from a mobile network. With more base stations comes more radio waves and there lies the thinking that 5G's waves may be more harmful we will be exposed to more radio waves.

What does the science say?

There is genuine, empirical evidence to support both sides of the argument when it comes to 5G and health.

In 2017, 180 scientists from 36 countries publicly appealed to the EU to halt the rollout of 5G until comprehensive investigations into its effects on human health were carried.

While no such focused studies have taken place as yet, there's some indication that the electromagnetic radiation produced by mobile telecoms equipment more broadly is harmful in certain doses. In 2011, the World Health Organisation (WHO), together with the International Agency for Research on Cancer (IARC), labelled radiofrequency electromagnetic fields as "possibly carcinogenic to humans", although they said that more longitudinal research must be done to form accurate conclusions.

The uncertainty of the WHO is emblematic of the results found by researchers in the field mobile telephony is a relatively new technology so the number of studies that can be done on the potential negative health effects for humans are limited.

There is one study carried out on rats that garnered a great deal of attention. The animals were exposed to mobile phone radiation for nine hours a day, every day, over the course of two years. The results showed that male rats developed cancerous tumours on their hearts while no link was found with the female rats.

The preliminary results were released in 2016 in their unanalysed form, which prompted health scare stories galore and significant criticism from the scientific community

According to Science-Based Medicine, once the results were published in full, they showed a picture that was "somewhat complicated, but ultimately do not support the idea that cell phones can cause cancer".

The truth in the waves

If you google "5G health risks", you'll be met with a mixed bag of balanced reports, mainly from the mainstream media but around a third of results on the first page feature pages repeating the danger to health the next-gen network presents.

One of the chief concerns cited by one of these websites is that 5G will be operating at a higher frequency, and because the frequency is higher, the radiation exposure reaches "ultra high intensity". While it's true that increased radio wave frequency does equate to increased harmful radiation, it falls well below the frequency at which electromagnetic radiation poses a threat to humans.

You may have heard of millimetre wave (mmWave) spectrum for 5G being the pinnacle of the technology, and it is, but even this spectrum, which runs at the highest frequency ever seen with mobile network radio waves, doesn't reach harmful levels.

These higher frequencies will also be emitted by more base stations which will have to be installed to counteract the decreased range of higher frequency waves. This, in turn, produces the concern that the public may be put at greater risk because they are being exposed to an increased volume of these waves.

While it seems there's some truth in the idea that increased radio wave exposure will be harmful to humans, the UK government is insistent that, after consulting with independent expert groups, there will be no adverse health effects if levels are below international guideline levels, as they are now.

In a guidance document, the government added that while exposure to these base stations could be harmful, "the strength of the radio waves from base station antennas reduces rapidly with increasing distance and the levels at locations where the public can be exposed tend to be small".

Base stations are typically placed on the top of tall structures and, if you look upwards while walking in a town or city centre, there's a good chance that you'll see one the white rectangular boxes attached to broadcast masts are fairly easy to spot. Being placed on top of buildings means that people below are unlikely to be harmed due to the radiation's strength being rapidly depleted with distance.

Another argument against 5G causing cancer is that the radio waves it uses are an example of non-ionising radiation. According to the American Cancer Society, only ionising radiation (such as x-rays and gamma rays) are strong enough to break human cells and cause them to become cancerous. However, it does stipulate that there are concerns whether some non-ionising radio waves could be biologically harmful under certain conditions.

"Some scientists have reported that the [radiofrequency] (RF) waves from cell phones produce effects in human cells (in lab dishes) that might possibly help tumours grow," it said. "However, several studies in rats and mice have looked at whether RF energy might promote the development of tumours caused by other known carcinogens (cancer-causing agents). These studies did not find evidence of tumour promotion."

It's unlikely we'll ever get a conclusive answer as to whether prolonged exposure to emittances from base stations and mobile phones are harmful to humans, but the science seems to suggest we're going to be okay.

Studies like the longitudinal one performed on rats would be considered too unethical to conduct on human subjects so it looks like we'll just have to keep monitoring the situation until anything more conclusive reveals itself. But until then, keeping blissfully tapping away.