Microsoft’s foldable tablet has been ten years in the making – but what if it wasn’t? 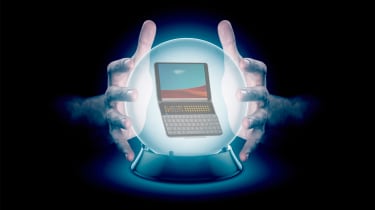 Time makes fools of us all. The world of tech journalism is rife with devices that are persistently rumoured to exist, but never actually see the light of day; despite breathless coverage of patent applications, concept renders and leaks' of varying legitimacy, these projects often come under the heading of vapourware. Sometimes they're scrapped before they get out of the conceptual phase, and sometimes they never even existed outside of fans' imaginations.

For more than a decade, Courier' has been one such project. The subject of rampant speculation by Microsoft fans, it was touted as the product that would dethrone Apple and restore Microsoft's rightful place as the king of devices. First leaked all the way back in September 2009, Courier was an idea that seemed mad at the time a dual-screen device that folded down the middle in a book-type form factor.

The project was ultimately killed by Microsoft or so the story went because it wasn't aligned with its Windows and Office products. It would appear that somebody inside the company's Redmond HQ never quite gave up on the idea, though, and rumours slowly began to circulate that it had been resurrected under the codename 'Andromeda'. This project, evidently, resulted in the new Surface Neo.

Looking at the very first leaked images of what Courier might look like, obtained by Gizmodo, it's virtually identical to the Surface Neo. It's strange, revisiting those early stories now; what looked at the time like a crazy moonshot now seems like a perfectly logical evolution of Microsoft's product line. Back in 2011, Cnet published an excellent feature on the project's cancellation, and it's hard not to imagine that the tech landscape might be very different if then-CEO Steve Ballmer had greenlit the project, rather than scrapping it.

Indeed, if I were J Allard ex-Microsoft grandee and co-founder of the Xbox project I suspect I'd be feeling somewhat vindicated by the whole affair. Allard was leading the internal team that was working on Courier, which was reportedly axed in favour of Windows 8, Microsoft's tablet-friendly operating system that was famously commercially successful and beloved by users (not).

In reality, the Apple iPad was left to reinvent mobile computing virtually unchallenged, while Microsoft floundered with a tablet OS that was such a commercial and critical flop that the company had to hastily throw together a heavily revised version to placate its angry users. So reviled were both Windows 8 and Windows 8.1 that the tech industry at large basically refused to upgrade from Windows 7, which has now caused a minor crisis as businesses are forced to upgrade directly to Windows 10 ahead of the looming Windows 7 end-of-life date.

If Ballmer's decision had gone the other way, we could well be living in a world where the iPad was little more than a footnote, where Windows 8 never emerged from the Stygian pits in which it was devised and Microsoft kick-started the dual-screen revolution a full ten years early.

It's eerily fitting, really, that a device with the Surface Neo's design is such an excellent example of the butterfly effect at work.