Could the best way to make calls be to avoid a handset altogether? 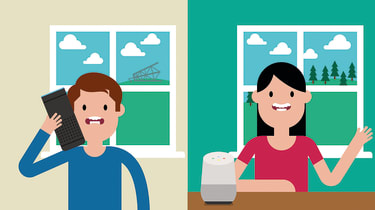 Is that the Eiffel Tower I can see from my bedroom window in Sussex? My mistake, it's a 5G phone mast. Or at least it will be, if this week's Digital Secretary, Nicky Morgan, gets her way.

Morgan has launched a "consultation" government jargon for something they're going to do anyway, but want to make it look like they're listening that will eventually allow mobile operators to build masts taller than 25m. Bigger masts mean signals that stretch further, meaning us out here in the boondocks might stand a fighting chance of getting a decent mobile signal without having to lean out of the loft skylight.

With 4G nothing but a rumour in these parts, I'm not holding my breath for 5G. In fact, I'm beginning to give up on the 'phone' altogether.

The best solution I've found is to avoid the phone full stop. They don't shout about it a great deal, but both Amazon Echo and Google Home speakers allow you to make free mobile and landline calls over the Wi-Fi network. You say "Alexa, ring Dad's mobile" and after a couple of seconds of thinking, you get put through to the old boy's phone.

Google Home is even more impressive in this regard, because it can call numbers you don't know. If you tell Google to call the Ask restaurant in Lewes, for example, it will look up the number and put you through. It's like Directory Enquiries, except you don't need to remortgage your house to pay for it first.

Call quality via both Alexa and Google Assistant is decent and reliable (Alexa slightly more so, in my experience), and you can tell both services your mobile phone number so that when you call friends and family, your name rather than "Unknown caller" pops up on their mobile screen.

The only downsides are that you're completely snookered if the company you're calling has one of those "press 1 for sales" switchboards, and you feel a bit of a plum saying "Alexa, end call" when you've finished your conversation it's normally best to let the other person hang up first.

The Amazon and Google options will deal with most outgoing call scenarios, but what about incoming calls? Here, I'm working on a Heath Robinson solution. Skype lets you buy UK numbers at a relatively modest cost of a fiver a month, so I can divert all my mobile calls to that number and pick up my incoming mobile calls on Skype, without worrying too much that the call will drop after five seconds.

The problem with this approach? Skype itself, which has an uncanny knack of ringing every device except the one you actually want to pick up the call from. This leads to hilarious scenarios where I find myself pressing an iPad to my ear. Yes it looks ridiculous, but it's still nowhere near as ridiculous as the Crystal Palace-sized mast Nicky Morgan wants to erect in my back garden.