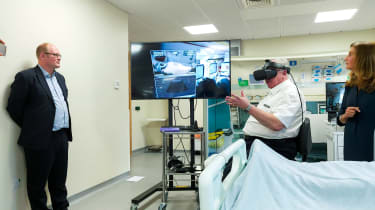 BT Enterprise has demonstrated how 5G can be used to deliver on-the-ground healthcare services and advice to paramedics from afar via 5G.

The demonstration took place at University Hospital Birmingham and involved an acting emergency department consultant advising a paramedic who was situated just under two miles away in a 5G connected ambulance.

Two scenarios were presented to a small group of journalists, both of which showcased the technology that healthcare providers can use to increase the level of care they can deliver and reduce unnecessary queues in hospital emergency departments.

Using low latency connectivity, live imagery could be sent back to the hospital so trained doctors could advise the first responders on the necessary next steps. Using virtual and augmented reality (VR/AR), clinicians could also see what the paramedic saw and send visual instructions to the paramedic's AR headset in real-time.

"Not only is 5G capable of ultrafast speeds it has much lower latency meaning there is little to no delay when transmitting data over the network," said Fotis Karonis, CTIO and 5G executive lead at BT Enterprise.

"This means things happen in 'real time' so this is of significant interest to the NHS because of its potential for medical applications, such as diagnostics and preventative healthcare. This capability provides efficiency opportunities for both hospital and ambulance trusts by reducing the number of referrals into hospital and patient trips."

In one scenario, which was described as a common occurrence, a fictitious patient required an ultrasound after reporting severe abdominal pain to Callum, the Edgbaston-based paramedic.

In this scenario, a trained clinician would be needed to assess the results of the ultrasound and determine whether the patient needed to go to an A&E department.

Using a joystick, the clinician was able to guide the paramedic's hand through a 5G connected haptic glove. The paramedic would feel vibrations in the glove dictated by the movement of the joystick which would give the clinician the view he needed to make an accurate assessment from the image he viewed in the hospital.

The clinician was able to identify a collection of fluid which was thought to be blood and made the decision to send the patient to a hospital.

In a similar real-life scenario that didn't actually require a hospital visit, a paramedic alone may not have been able to make the call, so would send the patient to a hospital to be on the safe side. Situations like these are considered to be a serious factor in the delay of service to visitors in A&E departments across the UK.

Calum Stone, the paramedic involved in the demonstration said on a typical shift, during which he would typically attend 10-12 incidents, he said he would seriously benefit from the input a more trained professional could provide on around 1-2 occasions for normal incidents.

The figure may seem small but when the number of paramedics working across the UK at any one time is taken into consideration, then the number of incidents that require more experience starts to rise to a more significant number. But for Stone, the consistent stream of data is the key benefit of the technology.

"That ability to transmit the data and show the patient's condition whilst en route, showing how they deteriorate and how they're improving [is key]," said Stone.

He said that traditionally, if a patient entered cardiac arrest while travelling to a hospital, the first time the doctors would know is when the paramedics walked through the door. Being able to transmit data like this while in transit will improve the quality of care that can be given at hospitals.

'Money is not the issue'

While the technology is certainly innovative, both BT and the medical professionals in attendance agreed that nationwide implementation is still years away.

The main blockade in 5G-enabled two-way connectivity between paramedic and clinician will not be due to a shortage of funds as the cost of VR headsets, for example, is minuscule compared to the price of traditional medical equipment.

"In terms of the cost of sort of healthcare technology, this [emerging technology] is right down the bottom," said Dr Tom Clutton-Brock, clinical director of the NIHR Trauma Management MedTech Co-operative. So the plastic dolly [in the demonstration ambulance] is over £100,000. The ventilator in here, it's about £50,000. So the cost of the headset per se, I think is almost irrelevant."

The pertinent issue with this type of technology is actually getting people to embrace it and allow it to be used widely without fear, according to Clutton-Brock. A necessary cultural shift will involve patients becoming accustomed to healthcare providers wearing strange-looking goggles and speaking to other people who are guiding their movements.

"I think people are beginning to accept that we need to move forward and healthcare," he said. "I do think if you explain to people why you want to do and explain the benefits of doing that, I think they would understand."

Aside from on-the-ground treatments, the technology could be used to train inexperienced paramedics or for walk-in centres. In the latter case, images can be sent to doctors at a nearby hospital who can then decide whether the patient needs to go for further examination or not.