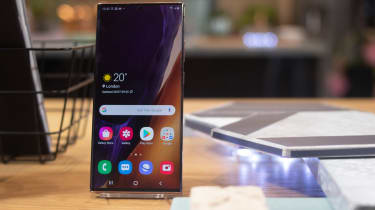 Samsung managed to launch the S20 and S20 Ultra before the coronavirus crisis really exploded, but the company’s second-quarter results have shown that the pandemic has hit sales pretty hard. As a result, it lost the top spot to Huawei. This is partly down to not having a big presence in China, where the economy is up and running again, which has given Huawei enough time to surpass its Korean rival.

Now, Samsung needs a good third and fourth quarter of 2020 (as we all do) and a lot is pinned on its second flagship of the year - the Galaxy Note 20 Ultra. The original phablet has a new model ready to greet us from lockdown, but is it any good?

For the second year in a row, the Note range comes with a larger, souped-up version in addition to the standard model. This time though, it’s bearing the ‘Ultra’ moniker, like the S20 which was released at the start of the year. As ever, the Note is neatly designed and quite square compared to the slightly curvier S20. It’s thick too, measuring 8.2mm and weighing a sizable 208g.

The three rear cameras are encased in a rounded black module protruding from the rear, which is the current trend if Huawei’s P40 Pro and Samsung’s Galaxy S20 are anything to go by. It means that the phone doesn’t lay completely flat on its back, but not so much that it becomes awkward when using it on a tabletop.

Every colour the Note comes in has been jazzed up with the fancy-sounding ‘Mystic’ prefix, but to begin with, both the standard sized Note and the Ultra are actually fairly conservative. You can have the Ultra in Mystic Black, Bronze or White, whereas the regular Note comes in green, bronze or grey. These are ok, but they do lack the sparkle of other Samsung handsets or even previous models of Note. The Note 20’s green is quite striking but it’s for ‘selected markets’, according to Samsung - and no word yet as to whether that includes the UK. 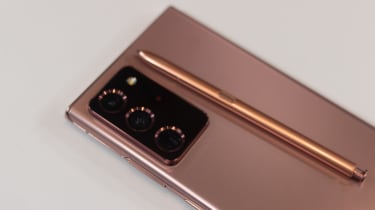 The Note Ultra comes with the same 6.9in display as the Note 10+ did, and like its predecessor, it appears to be quite brilliant. We obviously won’t know its full capability until we test it properly, but from first glance, it’s bright, bold and incredibly crisp.

The screen is a 120Hz WQHD+ Dynamic AMOLED display with a resolution of  2,088 x 1,440 and 494ppi. We doubt there will be any major issues with this, and we expect a pretty stellar set of test results; this is one of the company’s specialities, and it looks to be another fantastic Samsung display to add to the list.

Like the S20 Ultra, the Note has an in-house Octa-core 2.73GHz Exynos 990 processor - which is a change from the 9825 version in the Note 10. Again, without testing it we won’t know its full power, but the Note has always been strong in this area. The Note 10 was one of the fastest Android phones of 2019 and the S20 Ultra one of the fastest so far in 2020, which suggests the Note 20 Ultra will follow suit. It comes with 12GB of RAM and 256GB or 512GB of storage (and 1TB of potential microSD expansion).

Elsewhere, the Ultra is brimming with features and, for the second year in a row, it’s 5G-enabled and supports Wi-Fi 6. It also has IP68-rated waterproofing, Samsung DeX support and a colour-coordinated stylus. There’s also a 4,500mAh battery, which can reach 50% charge in half an hour thanks to Samsung’s fast-charging, Welcome touches to be sure, but these are all largely the same as the Note 10+, aside from minor improvements such as Dex supporting wireless screen sharing and less latency with the stylus.

Again, there’s no Bixby button (thankfully) but the virtual assistant is still pointlessly lurking in the background. There are rumours that Google is pushing a deal with the Korean giant to make its search and assistant more prominent on Samsung smartphones, but for now, you’ll still have to put up with Bixby. 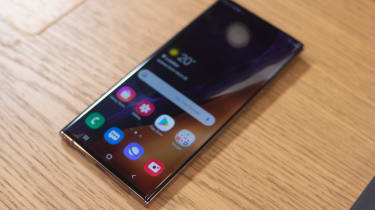 A handset with less than three rear cameras is barely worth contemplating nowadays and at least one of them must have some level of optical zoom. In this regard, Huawei’s P40 and it’s Leica lenses would be well out in front, if not for the lack of Google services. As such, Samsung’s Galaxy S20 and Note 20 Ultra can afford to have ever-so-slightly less impressive camera specs, thanks to its support for full-fat Android.

The Note 20 Ultra has a quad rear camera setup, including a 108MP lens, a 12MP 5x telephoto lens and a 12MP ultra-wide 50x Space (hybrid) zoom, that will only actually be worth using with the AI-based stabilising feature. There’s a 10MP selfie cam on the front, as well.

The Note 20 Ultra will be available for preorder from 5 August for £1,179 and while there is plenty to like about it on paper, there’s not a whole lot of new features. Essentially, it’s the Note 10+ without the funky colours.

A few performance enhancements are welcome, but making the Note 10 a tiny bit faster isn’t going to be enough to entice an upgrade, especially given the troubling recession the world is heading into. Unfortunately, there’s nothing of note here.